The art of bonsai-making is definitely something that isn’t so difficult to learn. The Ficus bonsai is a great species to start off with. But which type is best for you?

Watering is essential. The key is to only water when the soil is dry. That way, you’re sure to avoid root rot. Root rot (phytophthora is the botanical name) occurs when too much water is given to the plant.

In winter your bonsai will need much less water, perhaps only once a fortnight. In summer, however, it gets thirstier: you might have to water twice a week.

The most important care you can give your bonsai ficus is to repot it when needed. Every two or three years, repot your ficus bonsai to give it fresh soil nutrients and aerate/thin the root clump. 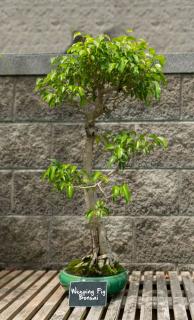 Trimming off long shoots is the way to keep your ficus bonsai in shape. Every time you cut the tip off a branch, at least two new branches will sprout out from below. A good rule of thumb to prune well is to snip the tip off every time a branch has  5 or 6 leaves already.

In the case of grafted ficus, take care to remove any suckers forming from below the graft point. These are branches from the rootstock variety and are often much larger than the original cute bonsai leaves.

The bonsai shown here is trimmed according to an ancient Japanese pruning technique called ‘Niwaki‘, or cloud pruning.

Pests and diseases on Ficus bonsai

Apart from thrips and, occasionally, scale insects, you won’t ever get any pests on your bonsai ficus.

How to thicken Ficus bonsai trunks

There are three ways to thicken the trunks of a ficus bonsai and make it more interesting. 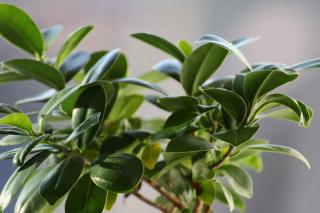 The most common ficus bonsai is, without a doubt, Ficus ginseng. The lush, thick roots are fascinating to look at! It’s an easy bonsai to care for since it doesn’t die very easily.

Apart from this perfect beginner bonsai, it’s also possible to grow ficus bonsai from other species as well: 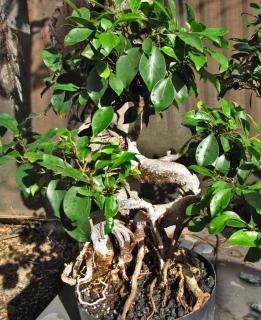 The “small-fruited fig” has roots that swell at the crown. Nurseries uproot them a bit and plant them higher up to showcase them.

Quite a few varieties are available: 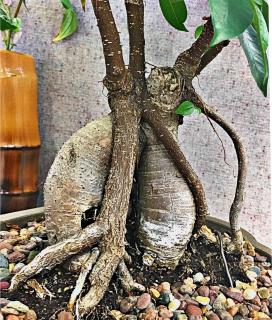 Ficus retusa is often selected to grow mid-sized bonsai. In hotels and lobbies, this is the variety you’ll find.

It grows trunks that can be easily shaped. 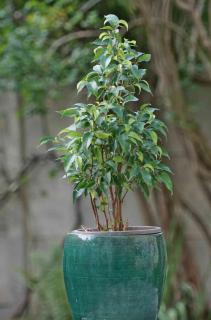 The slightly larger leaves of Ficus benjamina mean that this variety is also best for larger bonsai. In the wild it can grow dozens of feet high (several meters).

In particular, this species is great to experiment with braiding trunks. Braided ficus trunks definitely have a surprising appeal!

Rare and elegant is the Ficus benjamina ‘Nastaja’ (shown here): a bundle of trunks is wrapped in burlap, and it grows into a beautiful small-leaved weeping fig bonsai. Watch out because it doesn’t like staying dry for too long.

There are hundreds of ficus species and almost all of them can be grown as bonsai. Shown here is a 40 year-old Ficus thonningii. 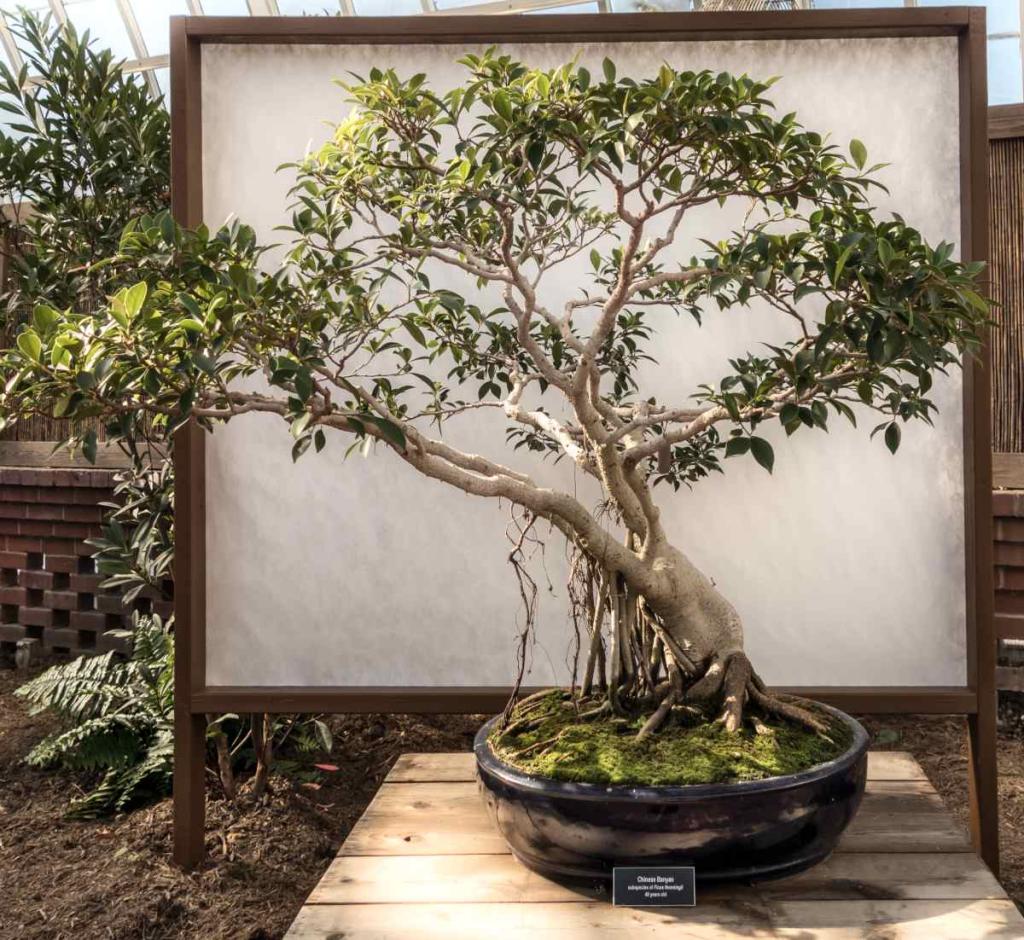 Even Ficus carica, the common fig tree, can grow as a bonsai, though you won’t get many figs at all!

It’s extremely rare to see any fruit on a ficus bonsai, but it can happen. The Ficus microcarpa is known to have tiny fruits like figs, no bigger than a fingernail. They’re rarely fertile, though, since each species depends on a single specific wasp species for pollination.

Ficus carica, the common fig tree
Ficus carica, better known as the common fig tree, is the tree species that produces the famous green, black or…
Ficus benjamina, ideal for indoors
Ficus benjamina is certainly one of the favorite plants all around, and deserves to be taken care of diligently. Basic…
Ficus lyrata, the fiddle ficus
Ficus lyrata, the fiddle-leaf fig, is a very beautiful indoor plant. Many find its thick, shiny green leaves very appealing.…