People love ficus ginseng for its thick, swollen apparent roots. In time, it’ll even send down new aerial roots down to the pot! Learn more about how air roots form and why your ficus sends them down. And how to trigger them!

Root sticking out from a branch on Ginseng ficus

Description of an air root on Ficus

You might notice a strange branch emerging from the trunk or from a larger branch on your Ficus bonsai. It doesn’t have any leaves and twists and turns in every direction. The tip of it is an ivory-white color, but in time it covers itself in bark like the rest of the plant.

What happens to this air root?

Over a couple weeks, it grows an inch or two long. Often, it’ll dry up and fall off, especially if it doesn’t reach down to the soil. Sometimes, though, it can survive for a long time whenever the air around it is very humid, as in a bathroom. In the end, it tries to find soil to root itself in and start feeding the plant.

When it does root, it won’t become thick and fat like the other existing roots: it’s often not the same species since these bonsai are grafted.

What are aerial roots?

An aerial root is a root that appears in the air, sprouting from existing branches higher up. Some plants survive entirely on air roots, like Tillandsia. Others, like our Ficus, use them to spread to new places and cover more surface.

Aerial roots are rare in temperate climates, but they’re quite common in humid tropical countries. That’s where Ficus Ginseng comes from!

Ficus microcarpa (the species from which most Ginseng ficus are prepared from) often sends these roots out from branches directly.

Why is my Ficus making air roots? 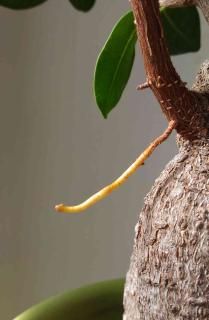 It does this for two reasons: it needs to compensate for lack of water/food, or it’s simply happy and wants to grow more.

Indeed, you’ll notice your ficus will tend to started sending such roots more when:

However, even a perfectly healthy Ginseng fig will send aerial roots out from the trunk, which goes to show that it’s a natural occurrence!

How to trigger air roots on Ficus ginseng

Moisture is the key to promote air root formation on your ficus ginseng. The air must be very moist around the plant.

You can try the following to get aerial roots:

Once root stubs appear, make sure to mist often so it doesn’t dry out. After it hits the soil, you won’t need to mist as often.

Should I cut the air roots off my Ficus?

As a result, most horticulturists snip them off, because they make the shape of the bonsai look a bit messy and the plants become harder to sell.

However, once the plant is yours, it really makes for a more interesting bonsai: around the thick original roots, you’ll have strands forming and connecting to the ground in new places. It’ll make your bonsai look more and more like a miniature banyan tree. Very much worth the wait!

If you want to make sure your air roots survive and find soil, increase air moisture around your pot.

How to prune lavender that is woody
Lavender is often a sentimental plant. After about a decade, it tends to grow old, woody, and overgrown. Learn how…
Bana grass, a tall grass for landscaping and much, much more
Bana grass is a specific hybrid of Pennisetum. Its amazing growth power makes it suitable for many purposes, from tall…
Japanese inspiration for the garden
Tiny marvels of balance and elegance, Japanese gardens are a source of unlimited inspiration. You can select certain plants or…