It is great for growing in any home and doesn’t require any complicated follow-up. This indoor bonsai will do great both in nice living rooms and in cozy bathrooms, as long as it gets light and proper moisture.

Your Ficus microcarpa bonsai will do great indoors.

Repotting your Ficus microcarpa is essential, every 1 to 3 years.

This is a plant that naturally thrives in moist, humid climates. In ideal moisture conditions, it would even send out aerial roots, taking on a look similar to that of the banyan tree. This species also goes by the name “Chinese banyan tree” to prove the point!

Growth and vegetation slows, so it needs less water.

Bring your Ficus microcarpa to the sink and gently spray soft water on its leaves from time to time. That’s the perfect treat!

Other techniques to increase local air moisture will help, too. They’ll spare you from having to mist too often.

Ficus microcarpa can grow huge in the wild in tropical climates, but in your house you want it to remain a smallish bonsai for best effect.

How to prune Ficus microcarpa

Ficus microcarpa has the capacity to sprout new sprigs directly from the bark of the trunk. Thanks to this, you can’t make any “mistakes” when pruning!

There are two ways of keeping your Ficus microcarpa under control. Choose whichever suits you best!

1. Constant pruning means checking on the plant often and removing twigs and growth that doesn’t please you.

2. Seasonal pruning means only checking on the plant once or twice a year. Pruning is heavier.

There are slight differences in pruning that depend on whether your microcarpa bonsai is grafted or not: 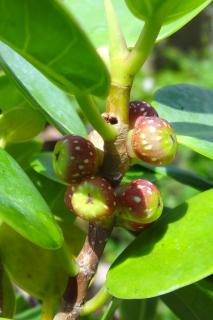 The latin name “Ficus” stands for “fig”. So the Ficus microcarpa is basically a fig tree! However, the second part of the scientific name, “microcarpa”, translates into “tiny fruit”.

This particular Ficus species thus bears tiny fig-like fruits. They’re rare and only appear when conditions are just right, but when they do, they’re very cute!

Ficus microcarpa fruits are at most half-an-inch across (1 cm) in size, and start out green before maturing to red and black. They aren’t edible for us but birds love them.

Interestingly the fruits are only fertile if visited by a single specific “fig wasp” insect. If this special wasp isn’t found in your area, or if your home doesn’t let bugs in easily, the fruits will grow but the seeds are barren.

This is actually a good thing because, in the wild, this plant tends to become invasive. Specifically, it is on the Florida invasive species list, in the United States. So far, the wasp (Eupristina verticillata is the scientific name) hasn’t spread much outside its native Asian range, except for the Americas.

There are dozens of Ficus microcarpa varieties. They differ in leaf size, leaf shape, leaf thickness, bark color…Nature is very inventive and breeders have noted many appealing variations.

Some Ficus microcarpa varieties are special and stand out:

As for diseases, here is a quick troubleshooting guide to see what might be hurting your bonsai:

Ficus microcarpa is native to Southern China and the islands of Oceania, but its success as an easy houseplant means it now spans the world.

A relative of the common fig tree, this Ficus is particularly well suited to bonsai. Beginners appreciate it because it grows fast, is easy to train, and is very forgiving if you forget to water it or care for it at times.

If properly watered, it won’t die on you on a whim like other, more fragile bonsai plants!

Growing it in moist and warm environments will trigger aerial roots which make for a great addition to a plant pot composition!

This species is quite common as a bonsai, and there’s a trick to telling it apart from the Ficus tree (F. benjamina). Look at the tips of leaves: sharp, pointed leaves belong to Ficus benjamina, whereas slightly rounded tips are those of Ficus microcarpa.

At times, a sister species called Ficus retusa is mistaken for microcarpa. Retusa has thinner, curvy trunks. Stores often sell one for the other, under the name Ficus ginseng!

Like all other ficus plants, this species can fuse its trunks together. If you want to grow a thick bonsai fast, wrap thinner stems together and within three or four years they will have grown into a single wide trunk!

Ficus forever, a series of beautiful weeping figs
The Ficus Forever series is a collection of magnificent indoor plants from the Ficus benjamina species. Its beauty lets it…
Azalea japonica, the Japanese azalea
Azalea japonica is a small heath shrub that provides evergreen, bushy growth. Its main appeal, however, is the massive blooming:…
Which air-purifying plant to get first?
As they breathe and grow, these plants purify pollutants out from the air... and they're beautiful, too! Discover Ficus ginseng,…