Ficus retusa is one of the trees most often used to grow bonsai.

It can be distinguished from Ficus benjamina thanks to its thicker leaves. Often mistaken for Ficus ginseng, even in horticulture stores.

Ficus retusa, although easy to care for, demands a bit of attention in order for it to grow in the best growing environment.

Ficus retusa doesn’t require abundant watering, and it mustn’t be watered too often, either…

It is even important to let the soil dry up in the surface before watering again.

Ficus retusa loves it when air moisture is high.

Finally, note that your ficus retusa will appreciate having its leaves cleaned often with a rag or a moist paper towel.

Here are the tips on how to prune your Ficus retusa into a bonsai.

Snip new shoots off as they appear, for the original shape to be preserved or to make it evolve to the shape you would like it to take.

Ficus retusa is quite resistant to most diseases, fungus and parasites. Nonetheless, occasional issues may arise.

Your Ficus retusa is losing its leaves

It might be that your Ficus retusa is drowning in excess water, that it lacks environmental moisture or light.

Note that being placed in a drafty area can lead to partial or complete leaf loss.

This is often due to an attack of red spider mites.

This is usually due to mealybugs or scale insects to which the Ficus retusa is very vulnerable, especially indoors. 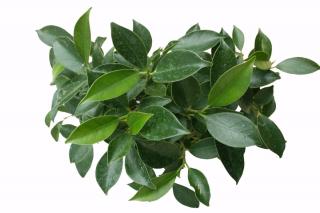 Ficus retusa is one of the rare tree species that is able to grow indoors as well as outdoors. This is also the reason why it is one of the most common bonsai trees.

Although the true Ficus retusa tree mostly grows in the wild in South-East Asia, sometimes Ficus retusa branches are grafted to Ficus microcarpa to produce a type of Ficus ginseng. That’s why the name seems so familiar to many plant lovers across the world.

Usually, original Ficus retusa leaves tend to be larger and longer that those of Ficus microcarpa varieties. Ficus retusa leaves are up to 4 to 6 inches (10 to 15 cm) long in a healthy setting, whereas Ficus microcarpa leaves never exceed 4 inches (10cm). However, identification is sometimes tricky because growing plants as bonsai often makes leaves grow smaller than they normally would.

The ficus tree that has leaves that most resemble those of Ficus retusa is the common weeping fig, Ficus benjamina. One way to tell them apart is that the weeping fig has thinner leaves. Also, the bearing is different: ficus retusa won’t droop and “weep” as its cousin does!

Ficus retusa will appreciate spending the winter in a cooler spot, ideally around 60°F (15°C).

Ficus microcarpa, a bonsai for starters
Ficus microcarpa is a small, easy bonsai often found in DIY or house furniture stores. It is great for growing…
Ficus tree maintenance: repotting
Your ficus starts hinting it feels in a tight fit? Time to repot, and this short video will make things…
Ficus bonsai – the beginner’s bonsai… whatever the species!
The art of bonsai-making is definitely something that isn't so difficult to learn. The Ficus bonsai is a great species…