A grafted ficus combines bulging roots of Ficus microcarpa with glossy leaves of other fig species. This is the origin story of this famous fleshy-rooted bonsai.

What is a Ficus ginseng bonsai

Surprisingly, most store-bought ficus bonsai aren’t prepared in ancient bonsai master schools. They’re grown and grafted in nurseries by the thousands in tropical regions of the world.

This helps make out favorite ficus ginseng affordable for all!

Why are ficus ginseng roots so thick?

When preparing the usual “Ficus ginseng” bonsai, each Ficus microcarpa sapling is pulled out to expose the roots. The long, spindly stem is cut off just above the thick bunch of roots.

Roots are cleaned and then gently set atop fresh soil mix, higher up than they were buried. At this point, they:

From the cut trunk, new side branches will sprout for non-grafted specimens.

How is a ficus ginseng graft made? 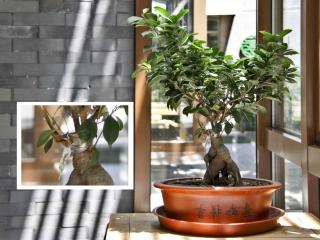 Nearly all fig tree species can be grafted onto one another.

Older branches are grafted at the cut mark. Typically, 3 to 5 scions are grafted using either the cleft or the bark graft technique. They shoot upwards from the graft, giving the tree a more “umbrella-like” appearance.

When pruning, you’ll always have to choose between favoring the rootstock shoots or the scions.

Out of curiosity, we suggest trying to let one rootstock shoot grow freely until it is just under a foot long (20-30 cm).

If you like the leaves more than those of the scions, start training that offshoot and cut the grafted scions back:

Whichever you choose, keep pruning and trimming the same branches as the main, structural branches for your ficus bonsai.

For denser foliage, every year, perform 3 important steps in spring:

Fig tree, generous from North to South
The fig tree isn't reserved to hot-weather climates in the South. Some hardy varieties make it possible to harvest these…
Ficus trees for all, the best species for the home
The Ficus tree genus counts hundreds of species, several of which are perfect to decorate homes. Whether gnarled bonsai or…
Sagina subulata, the moss-like ground cover that flowers before summer
Not always easy to grow a lawn in the dark shade of a building or tree. Moss often finds its…