The flower apple tree or ornamental apple tree is a magnificent tree to decorate a garden, even though it doesn’t produce any palatable fruits.

Commonly called the crabapple or crab apple tree, its fruits are edible but are often too tart and small to be considered.

The flower apple tree, or ornamental apple tree, is preferably planted in fall like most trees.

That ensures it can properly develop a root system before winter sets in which will guarantee proper vegetation when warmer days return.

But if you choose to plant it at the very beginning of spring, you’ll be able to accurately choose the blooming of your apple tree, because, if purchased in a container, it will already be bearing flowers at the store. This is useful since there are a great many varieties.

No specific pruning, unlike that of the fruit apple tree.

However, you may eliminate dead wood and weak branches as you notice them. 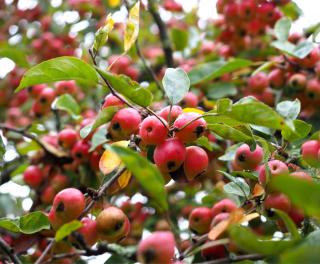 The flower apple tree is a magnificent ornamental tree that will embalm your gardens right at the beginning of spring.
It changes dramatically as seasons come and go, and is also one of the most beautiful autumn trees.

At the beginning of spring, pink and carmine red buds appear on the ornamental apple tree.

The color then changes to shift to variations of pure white, pink or red as the blooming evolves.

At the end of the blooming season, the foliage covers the entire space, with its distinctive deep green that will turn to orange red in fall.

At the end of summer, small red, orange or yellow apples appear and will stay on the tree for the most part of winter if not harvested.

The ‘Coccinella’ ornamental apple tree variety is very hardy and will bloom profusely in reddish-pink hues.

Quite resistant to disease, and often considered to be more hardy than the fruit apple tree, the ornamental apple trees is nonetheless occasionally visited by parasites and certain diseases.

Among the ranks of parasites you’ll find

Among the battalions of fungus you’ll find

When planted near an orchard, an ornamental apple tree will increase pollination of fruit trees!

Regular apple tree flowers will have a higher chance of being fertilized, and other species will benefit from beneficial insects attracted by the crabapple tree.

Meet the community
Need advice? Share your garden joys & woes!
Live from the forum
apples not appearing on my three trees

European brown rot, rotting fruit, techniques and treatments to avoid and cure the disease
European brown rot is a fungal disease caused by fungus that attacks fruit trees and can seriously impact harvests.  It…
Plant fruit trees!
Cherries, apples, pears… What a joy it is to harvest the fruits from your own garden! Fall is the perfect…
Top 5 spring-blooming trees
They catch the eye along streets and in parks and gardens. Learn how to recognize these five very common flower…