Pruning apple and pear trees to espalier or palmette is an interesting way to raise fruit productivity for apples and pears, and also to cover a wall.

Pruning following an espalier silhouette is easy, but it requires careful attention and regular follow-up to guide your apple tree and pear tree accordingly.

Here, in a video, you’ll find all the tips on how to prune and shape an apple or pear tree into an espalier shape.

We actually went over to the Valloires Abbey Gardens and talked to the Master gardener there. He opened up his secrets on how to grow trees into an espalier shape.

Examples of apple and pear trees in espalier patterns

These images share examples of apple or pear trees pruned in an espalier shape. Each particular type of espalier has a name which often draws back to the far past.

To train each, usually a square grid lattice must be set up and attached to the wall or to strong posts. String thick wire to mark out the “pattern” and tether new growth to the wire. 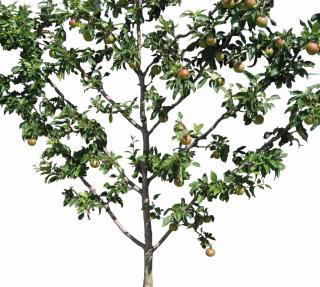 This resembles a “fishbone”.

The word “espalier” itself originates from old French, which previously had taken it from Italian “espalliera”. Going further back, the Italian word came from “spalla” which meant “shoulder”, from the Latin root “spatula” which was how the shoulder blade bone was called. Indeed, this type of pruning is only on a single plane. The overall shape of the tree looks like that curious flat bone!

Usually these forms are trained along a wall to which a lattice or treillis was affixed for easy tying. This made it possible to maximize yields in tiny, often urban gardens. It also made double use of walls and fences to reflect extra light and warmth on the trees.

But it’s also seen in open fields, where it makes it possible for motorized tractors to weave between rows of trees. This facilitates harvesting, weeding, and other mechanical tasks.

Harvesting and keeping 4 key fruit crops in Fall
September is a generous month, harvests are plentiful: apples, pears, walnuts, chestnuts... Sometimes, when we don't know how to keep…
How to keep apples – from the harvest until many months later
One fruit has what it takes to keep for many a long month, just for us to savor it deep…
Espalier training for apple and pear (2-minute video)
Apple and pear trees are regularly pruned to promote fruit-bearing. Did you know that shapes like palmette or espalier are…