Why prune tomatoes in the first place? 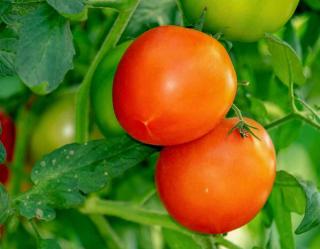 Pruning a plant helps meet several goals: make it look nicer, keep it in good health, and increase production of either fruits or flowers. With regard to the tomato, the goal is clearly to ensure a nive amount of healthy fruits. It isn’t necessarily desirable to have an industrial-sized tomato harvest: getting large and well-formed tomatoes is more pleasing and tasty. Pruning also has a positive impact on the health of the plant: it increases air circulation around its foot, which slows the spread of fungal diseases.

Two opposing camps: the “Yay” and the “Nay”

What’s best is to test both techniques on your own, so that you can determine which one works best in your area. That way you can also get the feel of which strategy matches your gardening style most. 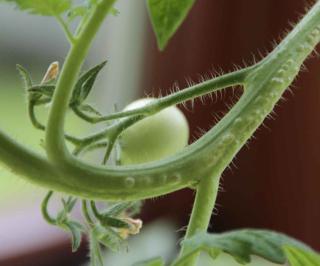 What is a sucker? When talking about plants, it’s a small shoot that appears at the joint of secondary stems. You’ll typically find them at the point where the main stem branches off into a secondary stem. It’s recommended to pinch these little shoots off, since they tend to absorb a lot of sap, and this always slows the plant’s growth. Doing so will divert more sap and nutrients further down the secondary stems, those that bear fruit. It’ll guarantee a better harvest.

How to remove suckers from tomato plants?

While they’re still small, you can remove them with your thumb and forefinger, pinching them off. However, if you’re a bit late in removing them, better use a sharp secateur or pruning shears. Remember to disinfect it before use to avoid unknowingly spreading diseases. Indeed, it bears reminding that every open wound on your plant is like an open door for bacteria. 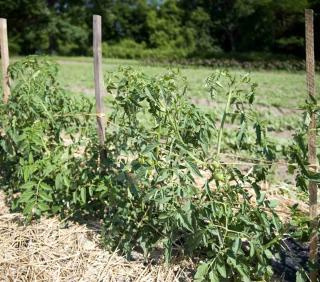 Topping off the plant means to cut the tip off the plant’s main stem. This is usually performed in August. The taller the plant and the more side stems it bears, the smaller the amount of nutrients and sap each fruit-bearing stem gets. This means it takes longer and longer for fruits to ripen and mature. Some gardeners thus recommend to only keep 4 or 5 secondary stems, each of which will bear tomatoes. Tomato production continues until October, up to the first frost spells. New fruits that form at the end of August don’t have much time to fully ripen. The point of topping off the plant is to concentrate all the available sap on existing fruits, to ensure that they easily mature before the season ends. It stops the plant from wasting its efforts on new stems that wouldn’t have time to bear fruit anyways. 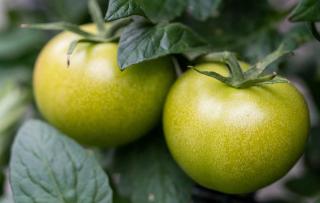 Once again, fruits are the focus of the gardener. To ripen, tomatoes need heat! In other words, the more the Sun’s rays directly hit the tomato, the faster it ripens. In this respect, it makes sense to remove leaves to make sure light reaches the fruits unimpeded. To be clear, though, you shouldn’t remove all the leaves! Just remove those few that are blocking out the Sun’s rays. You can also remove some of the lower ones that are touching the soil, since this is an entry point for diseases later on in the season. 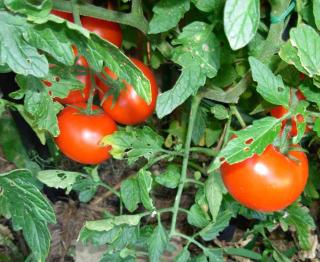 Pruning your tomato plants is by no means mandatory. After all, in the wild, nobody’s there to pick suckers off! They’ll need a lot more space, because they will spread out far and wide. You’ll have to space your plants at least 5 or 6 feet apart (1.5 to 2 meters). Your vegetable patch will have a much more natural look to it. And you’ll get to explore the underbrush, lifting branches to uncover your precious bounty beneath them. Using a stake isn’t recommended in this case, because it’ll never be tall enough to accompany the growth of your plants. An alternative solution is to opt for a cage that will keep leaves and fruits from rubbing on the ground too much. Whenever plants lay lying on the ground, moisture gathers and this usually leads to disease.

Good to know: some tomato varieties shouldn’t be pruned at all! This is typically the case of most cherry tomato varieties, and also those which are called “determinate” varieties: their growth doesn’t go on and on but naturally slows after a time.

Growing butternut gourd
Butternut gourd, also called simply butternut, is one of the most popular squash varieties. Basic Butternut facts Name – Cucurbita…
Physalis, winter groundcherry, a plant with many therapeutic properties
A plant full of health benefits native to Peru, Bolivia and Columbia, Physalis grows near houses and buildings in gardens…
Lavandin, the most successful lavender variety in the world
Lavandin is a stunning variety of lavender. The abundant productive flowers hint as to why it's a favorite of professional…