Home » Gardening » The Vegetable Patch » Pruning eggplant, when, why and how

To maximize your crop this summer, remember to prune your eggplant correctly! To get things right, there are a few rules to follow. Let us tell you which ones.

The staple vegetable of the summer

Just like tomato, the eggplant is a member of the solanaceae family. We grow it in our vegetable patch for its fruits that are great to bake moussaka, ratatouille and other tasty summer meals. Its bright green leaves are oval-shaped with slightly wavy edges. They’re covered with a soft fuzz.

Flowers are white or purple with a yellow center and a pointed calix. After the blooming fruits appear that have different colors and shapes according to the variety: long, round, large, small, purple, black, white… Sunlight and heat are the key words here to get a beautiful harvest. However, you shouldn’t neglect pruning: it helps ensure that every plant has an abundant production.

Why prune eggplant in the first place?

Pruning helps redirect the plant’s energy from leafage to fruits instead. Indeed, if you don’t prune at all, a number of stems will just keep on growing without bearing either flowers or fruit. These stems suck up the plant’s energy, since the same amount of sap is split among all its stems. By cutting these sterile stems off, you help the plant send more sap to the fruit-bearing stems. This will lead do an increase in fruit production, which is what matters most when growing vegetables!

When to prune eggplant?

Eggplant pruning takes place during the entire lifecycle of the plant, from the moment it has reached a certain size. Depending on how the growing is going, you’ll have to prune regularly between June and September. A good practice is to use a disinfected secateur, it’ll keep diseases from appearing and spreading.

How to prune eggplant?

What is a sucker? 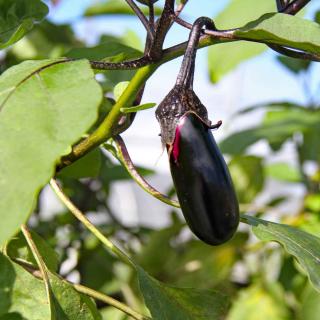 A sucker is a small stem that grows out of a junction between stems, or from the base of the plant. It’s a type of growth that makes the plant spend lots of energy for nothing, because it won’t bear any fruit. Removing it isn’t difficult: pinch it off with your fingers, rotating it off until it breaks. If you wait for too long, the suckers will grow too large, and you’ll have trouble knowing where to start. If this is the case for you, begin with identifying secondary stems. These are the largest shoots that grow out from the main stem. Check the junction of each stem with the main one, to see if smaller stems are sprouting out of it. That’s it, you’ve found the suckers, twist them off!

I forgot to prune my eggplant, what should I do?

Planting eggplant, the first steps to start your crop off right
An easy veggie to grow, eggplant is a pleasure to eat as well. With its purple peel and white flesh,…
Pruning Hybrid Tea roses
Pruning hybrid tea roses, sometimes called large-flowered roses, is an important step because from it depends the blooming of the…
Espalier training for apple and pear (2-minute video)
Apple and pear trees are regularly pruned to promote fruit-bearing. Did you know that shapes like palmette or espalier are…