Eggplant, or Solanum melongena, belongs to the Solanaceae or nightshade family. Its smooth-skinned fruit is the star of the Mediterranean diet.

The most common is the ‘Barbentane’ variety, which has a cylindrical shape and traditional dark purple color. But there are also white ones, striped white and purple ones, black ones and yellow ones.

China and India are the world’s two largest eggplant producers.

Native to India, eggplant moved to China 4 centuries before Christ. It then spread to Europe thanks to the Arabs, but not before the XIIth century.

Even though, it took time for eggplant to be appreciated. Indeed, people feared eating eggplant because they thought it would induce fever or epilepsy bouts. People thought it was toxic because it was very close in appearance to a toxic plant: mandragora, which also belongs to the Nightshade family.

Thus, eggplants were only used for its medicinal properties, especially in poultices against hemorrhoids.

Eggplant and its health benefits

Eggplant is ideal when you’re hunting down extra weight. It contributes to lowering bad cholesterol levels and also slows growth of atheromatous plaques and arterial hypertension. Moreover, this vegetable only has a nutritional energy value of 18kcal/ 3.5 oz (100 g), and which quickly makes one feel satiated.

Eggplant is a diuretic. Sodium-poor and potassium-rich – around 240mg / 3.5 oz (100 g) – and with a high water content (92%), it purifies the body. Eggplant is recommended in case of urinary tract inflammation.

Eggplant skin is also a major source of antioxidants. These protect the body from free radicals, and slow down appearance of cardiovascular diseases, cancers and early cell ageing.

It also contains beta-carotene which is beneficial to vision and against skin cell ageing.

Eggplant has anti-inflammatory properties, effective in case of mosquito bites. For that, apply powdered dried eggplant on bitten areas.

Eggplant stimulates gall bladder secretions and the proper functioning of the liver.

It is a source of iron, to fight against anemia. It also provides great amounts of potassium, magnesium, and in smaller quantities, vitamins.

How to prepare eggplant for its health benefits

Powdered eggplant – to whiten teeth and soothe mosquito bites, dry eggplant slices in an oven, add large amounts of salt (one part salt and one part dried eggplant in weight), and mash together.

Eggplant can be eaten like most vegetables: stuffed, baked, in a ratatouille, in a moussaka, steamed, grilled… The only thing to care about is to not eat it raw, because the solanine compounds found in raw eggplant are toxic. It can lead to digestion and nervous disorders.

It is preferable to eat it together with very little fats and oil, because its flesh tends to absorb fats.

The glycemic index of eggplant is only 20, which makes it very interesting for diabetic-related diets, but also when dealing with arterial hypertension.

Eggplant toast – Fry thin slices of eggplant in a frying pan with a little bit of olive oil. Fry until the water has disgorged.

On full-grain wheat bread, place a few slices of eggplant, one tomato slice and mozzarella. Add Provence herbs. Bake in the oven for the cheese to melt, and eat warm with lettuce.

Another idea: Add eggplant to your lasagnas, replacing some of the lasagna pasta with thick slices of eggplant.

Eggplant can nourish and hydrate your skin.
Sunburn – Eggplant is effective to soothe your sunburns. Blend an eggplant and apply on the burnt skin.
Anti-ageing mask – Blend the eggplant to a pulp, add one tablespoon argan oil. Apply preparation to the face for 15 minutes, then rinse with running water. 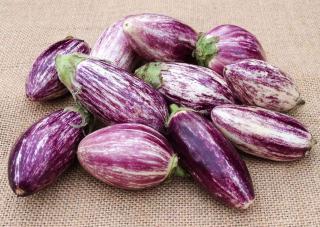 Keep your eggplant fruit in a cool spot away from moisture and sun. The vegetable compartment of the refrigerator is perfect for this. However, don’t dither to eat your eggplant, because it doesn’t keep for very long.

Eggplant skin is a nutrient gold mine for the body. Don’t peel it, simply rinse it before eating.

Choose smaller eggplant rather than large ones, the taste is much softer and distinctive.