Our busy daily life sometimes hinders us from properly managing our fruit & vegetable supplies. At times, we’re late in eating or cooking them, and mold appears on food!

Now, the question: Is it safe to eat food after removing the mold?

The answer is both yes and no depending on which food items we are talking about. For that, a little background information is needed.

Molds are a type of microscopic fungi that are mostly multi-cellular, thread-like organisms.

They thrive on plant and animal matter, forming colonies. When they grow large enough, they can be seen by the human eye.

Molds produce spores that can be white, grey, black or green in color. They form in spore-sacs that burst open when ripe. These spores are like seeds. Air, water, and even insects carry the spores from one place to the other.

There is no exact number how many species of fungi there are. What’s clear is that it’s an amazingly high number. The lowest estimates are of no less than a few hundreds of thousands of species!

Are yeasts and molds the same?

Where do molds usually grow?

Molds love food just as much as we do!

The perfect environment for mold is a warm and moist organic matter. This is exactly what food provides. Mold can grow on almost any food, be it raw or cooked.

When food is fresh, it has a particularly high water content.

What food can be eaten after cutting the mold out? 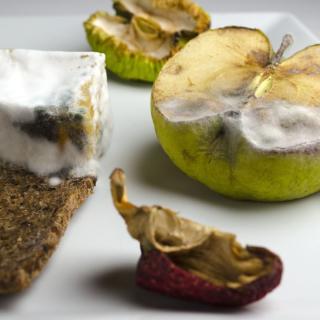 It’s important to know that if the layer of mold is thick, whatever the food, discarding it is the only option. But when there’s only a speck of mold or a very thin layer, two main groups of food can be distinguished.

Foods that are safe when a bit moldy – hard foods such as raw carrots, squash and hard cheese

Foods that are NOT safe when even a bit moldy – soft cheese, any food that has been cooked, and soft fruits and vegetables such as tomato.

Last but not least, you can influence how fast mold appears!

How to tell if food is moldy

Moldy food has a peculiar smell and taste. It is not that horrible but it is surely not pleasant either. It usually tastes like wet dirt or dust.

The quantity involved in tasting a mold (a dab of a finger or small lick of the tongue) is very small. Even if toxic compounds are present, it’s rarely enough to be dangerous or even to trigger an allergy.

Most molds are white or gray in color. Sometimes, more surprising hues appear, like blue or green.

How to keep mold from appearing

With most processed food, to reduce growth of molds, preservatives are added to food. They can be as simple as sugar, vinegar or salt. Sometimes more elaborate chemicals are used.

However, it is good to remember that molds are also present on all things, indoors and outdoors. Even when they’re not actively developing, spores are there, waiting for the right conditions to germinate.

Moldy food can cause health problems

Here’s a nice quote to remember:

An important point to keep in mind is that mold is like an iceberg. What we see is not all that there is.

Mold sends out “roots” and “branches” that grow beyond what appears on the food. Consequently, a layer of thick mold on food often has a matching depth of roots deep beyond the top surface.

In most cases, if mold is present, so is bacteria.

Some molds (and many bacteria) develop and spread toxins (specifically, “mycotoxins”). These are chemical compounds that the mold uses to break through plant cells to get to the nutrients inside. These toxins are the main reason molds are dangerous. They induce health problems like allergic reactions and respiratory problems.

What makes it difficult is that quite often, toxins are heat-resistant. This means cooking moldy food will kill the molds, but won’t destroy the dangerous chemicals. These remain in the food, undisturbed.

Waste not! – A new paradigm

Should moldy food always be thrown out?

Mold (or mould, in British English) clearly shows that rotting has begun. Not wanting to waste food, we don’t want to throw it all away.

Not only does it save effort and expenses, but, increasingly, it answers a deeper motivation.

Mold in the wild

In the wild, mold is an essential part of the ecosystem. In forests, mold breaks down fallen trees and autumn leaves. Molds also recycle decaying animal carcasses into nutrients.

Some animals, such as forager ants, have actually specialized in cultivating mold for food.

Usually, mold attacks and degrades dead organic matter. In the case of some fungal diseases such as sooty mold, even live plants are targeted.

Take two minutes to look up the local food poisoning center. Create a contact on your phone with the name “Food poisoning” and add the address and emergency number for that center. Also, write this up on two notes that you can set on the fridge and near the main door to your house.

Mandevilla, a climber that bears stunning flowers
Mandevilla is a remarkable vine. It climbs very high and bears flowers prolifically. Major Mandevilla facts Name – Mandevilla species…
Willow-leaf pear, a beautiful ornamental fruit tree with wispy leaves
This smallish pear tree has a bearing and leaves that closely resemble those of the weeping willow. Wispy leaves and…
Hedges, protective barriers against diseases
Did you know that a hedge does much more than just protect us from neighbors, wind and noise? If you…