An ornamental pear tree is a tree that bears cute flowers at the beginning of spring. Fruits are fine for birds and animals, but not for us – what we find appealing is the blooming!

Although it also produces small brown fruits, these have nothing in common with fruit pear trees and aren’t edible.

It is a good idea to plant your ornamental pear tree in fall to favor root development and renewed growth. 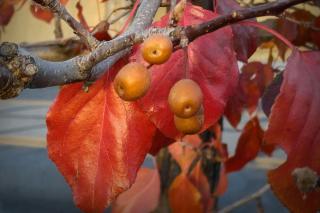 Regular maintenance pruning to keep the tree harmoniously balanced is enough. End of Fall is the best period.

You can also cut wood out from the center to let the light through and remove dead wood.

As for most fruit trees, the blooming is most abundant when the tree is in full sun. Also, feel free to boost the nutrient count in the soil with fermented weed tea or rich compost. Fall and Spring are the two seasons where this is most effective.

There are actually two species in particular that are available under the “ornamental pear tree” label.

This particular pear tree with willow-like leaves only shares one thing in common with fruit pear trees: its name! Indeed, its fruits taste horrible and are nothing like the pears we customarily eat. Birds, however, love them, especially since the fruits hold well into winter.

They undergo bletting, meaning they stay hard and inedible even to birds until frost and freezing softens them up.

It produces cute little flowers at the very beginning of spring together with its beautiful silver-lined leaves. Its growth is quick. It only requires very little care and watering is only needed in small quantities in case of high temperatures, especially at the beginning. It’s native to the Middle-East, where it’s currently threatened. Planting one in your garden raises the chance of saving the species!

Bradford pear, with biological name Pyrus calleryana, is native to the Chinese hinterland. It has a complicated history in the United States. First it was highly recommended by authorities (primarily because it resists fireblight), and now it’s regarded as an invasive pear tree in many places.

Light mulch will help retain a certain amount of moisture during the first years of growth.

Credits for images shared to Nature & Garden (all edits by Gaspard Lorthiois):
Flowering pear blooms by Eileen Carmel under © CC BY-SA 2.0
Copper-colored leafage by Carol Jacobs-Carre under © CC BY-SA 2.0
Cardinal approving the blooms by Brittany under © CC BY-SA 2.0
Meet the community
Need advice? Share your garden joys & woes!
Live from the forum
Pear tree not bearing any fruits Rowan Tree berries seem to have disappeared apples not appearing on my three trees

Cinquefoil, a cute bushy plant
Cinquefoil is a very cute shrubby plant that is easy to care for, and which has a blooming that lasts…
Beurré Hardy pear tree, early and abundant
The 'Beurre Hardy' pear tree is one of the earliest fruits for harvest in orchards at the end of summer.…
Hawthorn, a cute little shrub
Hawthorn is a shrub often used for defensive hedges, and it is also very ornamental. A summary of Hawthorn facts…