This smallish pear tree has a bearing and leaves that closely resemble those of the weeping willow. Wispy leaves and sometimes weeping branches make willow-leaf pear a great ornamental tree in the garden.

Usually, Fall is preferable to any other season. Follow the typical steps for planting a tree.

Pruning and care for Willowleaf pear

For this species, you’ll only need to prune whenever you notice the tree is growing out of balance. This happens in shaded gardens.

During the growing phase, you can also cut dead wood off if you notice any. It helps to clear the center of the tree out if it gets too lush and bushy. 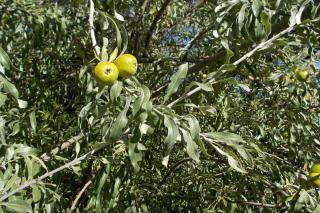 Leaves are thin and long, sort of like those of the olive tree or the weeping willow. They’re deciduous, though, meaning they’ll fall in Winter.

Some cultivars, those easily found in garden stores, also have a weeping habit. These are called weeping willowleaf pear, or Pyrus salicifolia ‘Pendula’. Branches trail down to the ground and produce a very nice effect.

The blooming is particularly abundant, and, if other pear tree species are nearby, cross-pollination will trigger lots of fruiting. However, these fruits are hard and bland. They’re not poisonous, but they aren’t very good to eat, either.

Currently, the species is endangered in its native habitat. As some botanical specialists say, planting them in your garden can help preserve the species from utter destruction!

For this pear tree species, you can graft a branch of common pear to a side branch it and get a few delicious pears!

Credits for images shared to Nature & Garden (all edits by Gaspard Lorthiois):
Willow leaf pear in the wild by a_teimurov under © CC BY-NC 4.0
Weeping willowleaf pear by Andrey Zharkikh under © CC BY 2.0
Meet the community
Need advice? Share your garden joys & woes!

Cuttings and propagation, guiding principles
Preparing cuttings is a simple plant propagation technique that works for many plants. Its main advantage is that it allows…
Bradford pear, the calleryana pear tree that went from true love to hate
A short-lived species in the Pear family, Bradford pear (Pyrus calleryana) bears particularly abundant blooms in early Spring. Bradford pear…
Which fruit trees will do best in my garden?
Available growing space, altitude, soil quality are additional factors to consider when choosing the tree that will enhance your garden.…