Guttation is the expelling of excess water or nutrients through tiny openings on leaves and stems. This biological process enables plants to restore balance between their nutrient and water content.

Guttation occurs when a plant oozes water and minerals out from perfectly healthy leaves, stems, and sometimes even flower petals.

It takes place when roots of a plant absorb more water than the plant actually needs.

Tiny, specialized cells on the surface of a leaf or stem are connected to veins and sap channels of the plant. This cluster of cells works as a nozzle. It releases water from the plant’s vascular system to the outside, forming drops that look like dewdrops.

This process where excess pressure is released from inside the plant is called guttation.

About the term “Guttation”:

To understand why plants developed guttation as they evolved, it helps to brush up the following:

Hydathode nozzles are one of the biological tools plants use to regulate pressure inside them.

Uses of water in a plant

Water used to transport nutrients up and down the stems and leaves is called sap. But there are more uses of water in a plant than simply transportation! Here is a short list of how a plant uses water:

Plants are under pressure

If ever you’ve opened a fresh coconut, you must have noticed that when the hull is slit, drilled or broken, coconut water spurts out. The pressure inside the coconut is higher than the pressure of the air around it. You can also see happen when slitting open a watermelon: the last few inches simply split apart on their own.

Thanks to a combination of chemical reactions, tissue structure and cell components, a plant is able to control water in and around it.

Guttation is one of the ways excess pressure is released. If not for this, the plant might burst at weak spots of veins and leaves!

When to find guttation on plants 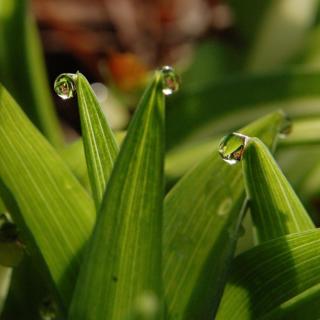 There’s a chance of seeing guttition on plants in the following situations:

Plants breathe at night and still need sap to flow up and down the plant. Guttation takes over to force sap and water up when transpiration stops being effective.

Days of high moisture and humidity

When the air is near or above 100% relative humidity, it’s impossible for a plant to sweat.

Excess moisture in the soil

It isn’t a common reaction, but guttation is one way of helping the plant evacuate excess water around roots. It’s a coping the plant uses to protect roots from rotting.

Plants that tend to show guttation

Here is a partial list of plants that have been shown to guttate. Have you observed guttation on any of your own plants? What are the crying plants you’ve encountered?

Many very common plants tend to guttate when conditions are right. They all share their short height in common: guttation rarely occurs higher than 3 feet (1 meter) above ground. Only a few tree species that love wet soils are very prone to guttating.

Grasses – almost all types of grasses, from the Pennisetum family to the banana tree, including fescue and bamboo. More often then not, when your lawn is wet in the morning, it’s not dew but guttation.

Houseplants – most types of succulents (Echeveria, Jade tree, Senecio, Kalanchoe…) and a great many houseplants such as Monstera, Dieffenbachia, Ficus, Philodendron, Spathiphyllum, the ZZ plant… Even members of the Dracaena family do it. Orchids also guttate but the hydathode cells are on the leaf surface, not around the edges.

On a different scale, other organisms that aren’t really plants also exhibit guttation: algae and fungi.

Most plants of the citrus family don’t guttate – this makes them more vulnerable to edema.

Taller trees, especially in temperate regions which are cooler and drier than the tropics, don’t guttate much. 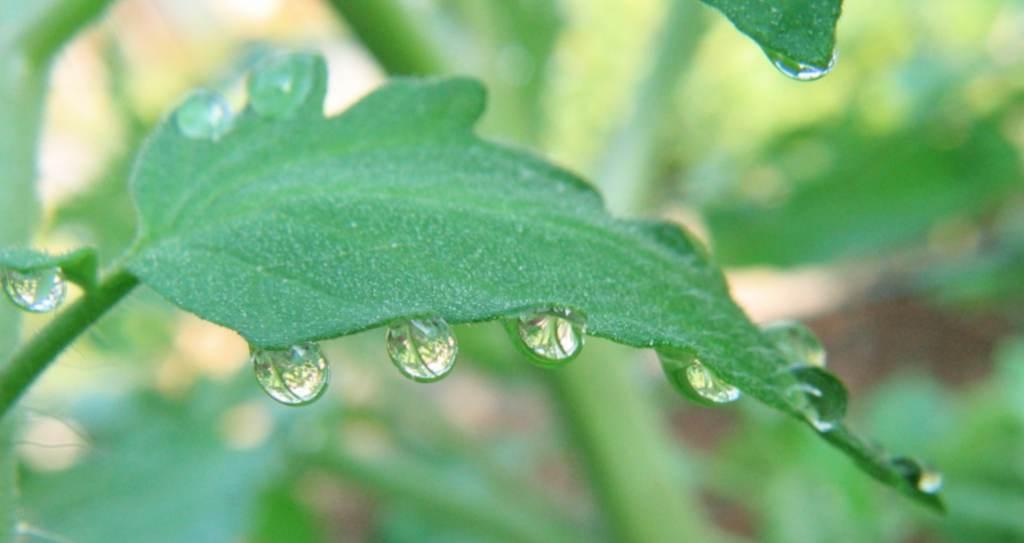 For us humans, and pets or animals, it’s almost impossible to contract illness, disease, or problems due to guttation.

There is no known allergy to guttation fluid, except in cases where the plant itself induces allergies.

It’s mostly water, but there are a lot of other compounds as well:

Bees and many insects, however, rely on guttation to drink. This is particularly dangerous for them when the plants they drink from have been sprayed with pesticides and insecticides.

This proves how important it is to always refrain from using chemicals. It’s far better to use natural, home-made fertilizer and pest control instead. 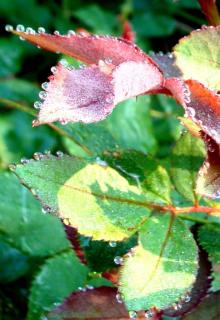 Gummosis and latex flow are similar to guttation in that fluids are also expelled from the plant through controlled interfaces.

Bleeding, resulting from a wound to the plant, is different.

Dew and dewdrops are something entirely different, but are also useful to plants. Plants can maximize dew without being responsible for creating it.

Guttation can even reach the point where sap drips to the ground. It can leave hard-to-remove stains on almost every surface, indoors and out!

So hose it away outside, and wipe it up indoors.

Guttation and plant diseases, should you wipe it off?
Breakthrough research is analyzing the effect of guttation on the spread of plant diseases. In some cases, guttation is bad…