Dracaena marginata is an indoor plant that owes its ease of care to survival mechanisms that developed over eons. Drought and irregular rain cycles tweaked the plant’s natural structure and turned it into a plant that can cope with extremely irregular rainfall.

This makes it perfect for absent-minded owners who occasionally forget to water the sturdy dragon plant!

However, scientists report that changing climate patterns might test the dragon tree’s capacity to survive in the wild.

A cell structure designed to cope with drought

Plants have several tricks up their sleeve to cope with water stress. Dracaena marginata is no exception, and it has perfected a few strategies to ensure it can survive when available water disappears. It shares these with all plants of the Dracaena genus. 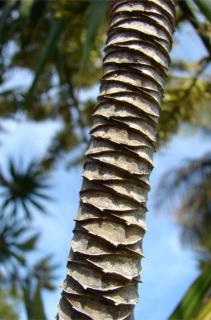 Much like a baobab or a cactus, the stem of the Dracaena marginata plant is the key to its survival during dry weather. The special fibrous trunk can contain tremendous amounts of water. It slowly releases it to the leaves so that they may perform their task of converting solar energy and nutrients into organic plant material.

A second surprising characteristic of Dracaena marginata stems is the very high water-pulling capacity. Water found below in the root system is drawn up through the stem like a powerful vacuum. This is called “hydraulic capacitance“. It’s caused by a special breed of starchy carbohydrates that bind to water intimately and pull it up out of the ground.

Together with the amazing root system, the stem literally sucks the water out of the ground, vacuuming up every single available droplet. Roots and stems of the dragon plant can hold water on a basis almost equivalent to that of the famed baobab tree! (Water per weight of plant matter). 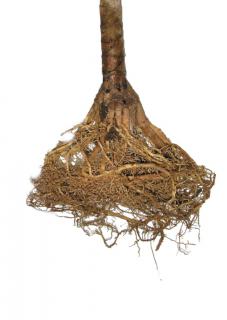 The root system of the dracaena marginata is incredibly dense. It  will weave its way to every corner of the pot. It thus is able to pry every single drop of water that is within reach.

When rain falls and flash floods occur, the combination of roots and water-absorbing stems means that the Dracaena marginata plant is able to replenish water reserves in a very short time.

That’s why the dracaena marginata is capable of surviving droughts and dry spells. Indeed, it can suck water up in tremendous amounts as soon as it is available, and can hold on to it without loosing much in hot weather.

Madagascar and Mauritius are witnessing changes in weather patterns, more specifically as regards rain and precipitation.

Some areas receive less water than ever before, leading to a first signs of desertification. The land is more arid and dry. Precipitations are fewer and farther between, even as mean temperatures rise. For example, in southern Madagascar, temperatures have risen by 1.6 °C in the cooler season, and by 2.6 °C in the warmest season (3°F and 5°F respectively).

Total amounts of water decrease, and tend to concentrate on fewer days. This means flash floods are more likely than they were in the past, and most of the water is lost to runoff instead of seeping into the soil.

From an agricultural point of view, weather patterns are more erratic and unpredictable. This means crops and cultures are lost to flooding or drought. As a result, foraging increases to compensate lost crops and new fields put pressure on previously pristine habitats.

All this seems to hint that in their own native environment, some plants like Dracaena marginata might have to be surveyed and protected against habitat loss. Precautions must taken to keep them from being wiped out. Even massive wild Dracaena marginata are at risk of disappearing. Indeed, although evolution has gifted them with the strong coping mechanisms described above, they might not suffice given the magnitude of these changes.

How often to water your dragon plant, Dracaena marginata

Water once a week to speed Madagascar dragon plant growth up

If you want to maximize the growth of your Dracaena marginata, you should water at the most every 6 to 7 days. This is the time it takes for the plant to exhaust most of the water reserves it has acquired during the previous watering.

If you wait more than 6 days, the plant starts triggering water stress mechanisms. The dragon plant stops its daily growth spurts and starts shutting down leaf production. Towards the end of these seven days, root growth is privileged.  New nooks and crannies in the soil are explored by the growing roots.

Dracaena marginata can survive for over a month without watering 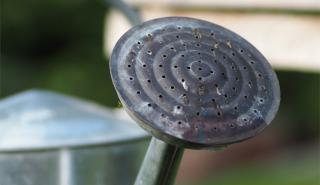 In some experiments, Madagascar dragon plants grown from simple cuttings bounced back to life within days, even after not having received a single drop of water for over 30 days.

The plant does suffer from the lack of water, though. It needs several weeks of regular watering to recover normal growing activity. But this behind-the-scene process goes mostly unnoticed by many of us, which makes Dracaena marginata an ideal companion for the office or for the busy household!

All in all, a very sturdy houseplant that will easily cope with the artificial drought that hectic days at work and at home can produce!

Watering again before the soil has dried out entirely puts the plant at risk of developping yellow dracaena leaves. This is a sign of overwatering and must be dealt with swiftly.

The extensive root system must absolutely be kept out of water, or your Dracaena marginata would quickly develop root rot.
Ensure that the pot has a drainage hole and doesn’t rest in sitting water.

Credits for images shared to Nature & Garden (all edits by Gaspard Lorthiois):
In full sun (also on social media) by Peter under © CC BY 2.0
Stem by Kim & Forest Starr ★ under © CC BY 4.0
Rootball by Maja Dumat ★ under © CC BY 2.0
Watering can by Ratfink1973 under Pixabay license
Meet the community
Need advice? Share your garden joys & woes!

Easy plants for healthy indoor air
Putting one leaf plant for every ten square yards (m²) will help purify the confined indoor air of your home.…
Dracaena marginata roots, the dragon plant’s strength and weakness
It seems like magic when a Dragon plant cutting sets out its first roots. The Dracaena marginata's roots are full…
Dracaena massangeana, the mass cane plant
Dracaena massangeana belongs to the dragon plant family, and its complete scientific name, D. fragrans, hints to its rare amazingly…