It seems like magic when a Dragon plant cutting sets out its first roots. The Dracaena marginata’s roots are full of surprises! Surviving dry spells, propagation… and that houseplant nightmare, root rot!

The structure and the type of cells in the Draceana marginata root system are exceptionally good at snapping water up as soon as it hits. This is because in the wild, dracaena is often subject to dry spells. For weeks on end, absolute drought, and then a downpour that washes out in minutes… and then back to drought again!

A dense root clump with many rootlets

Water is absorbed during a flash flood in seconds thanks to the large number of tiny roots. These act as a sponge that quickly absorbs any water that touches it. Furthermore, they tend to spread through around the clump to reach every single pocket of soil nearby.

The stem is where the dragon plant stores most of its water. It has a special capacity to lock water in. Roots quickly send off any water to the stem for storage through the few larger roots. Unlike other plants that have roots that constantly branch out into smaller and smaller roots, resulting in roots of every size, the Dracaena root system is clearly a two-size only system: larger roots, and then many shorter thinner ones.

All these roots are specialized in two things: soak up water, and transfer it to the stem immediately! It’s what makes survival possible when the dragon plant isn’t watered and then is flooded with lots of water.

This strength of absorbing water fast and sending up to the main stem is actually the plant’s greatest weakness as a houseplant. Indeed, when the stem and leaves can’t take anymore water, roots can’t evacuate excess water anymore! They stay bloated and thick, each cell holding as much water as it can.

If there’s still water around the roots, they’ll just keep swelling even more, until cells along the root surface are stretched to the maximum. At this stage, at the microscopic level, tiny cracks appear between cells on the outer rim. Through these cracks, plant-killing fungus weasel in and start infecting the plant.

Almost every type of soil has these fungus in some form or another, usually dormant and harmless. But when they’re able to enter a plant, they rot it from the inside, killing it to feed. Wallowing in water for days on end weakens the Dragon plant’s roots to the point they are unable to resist, and the fungus takes over.

Once root rot has begun, they lose their ability to channel water to the stem. The rest of the plant, paradoxically, doesn’t get enough water anymore! Leaves start drooping over and turn yellow: green chloroplasts can’t work anymore and die off. Root rot progresses towards up the stem, and it starts getting soft and falls over. A classic case of overwatered dracaena. 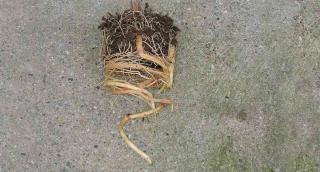 Dragon plant roots will constantly grow in search of water. In a pot, they’ll quickly start running around in circles. It’s important to keep them from choking each other out, which is why it’s recommended to repot your dragon plant every 2-3 years.

Another sign that it’s time to repot is to check the whole at the bottom of the pot: if roots start creeping out of it, time to repot!

Should you cut dracaena marginata roots?

If they’re circling the pot, absolutely, yes! It’s pretty easy to do, but one thing is important: repot with fresh soil mix at the same time. This will save you the effort of pulling the plant out again for repotting later on. Simply cut them with a sharp, clean knife, shears or strong scissors. You can remove a large portion of the roots if you need to: up to half.

When the root clump is much smaller, you can proceed to repot your dracaena.

Stems are where everything new can grow. At each node, where a leaf has fallen off from the stem, cells exist that can transform into any needed plant part. These will turn into roots if they’re submerged in water – even more so if in the dark. If light hits them, they’ll turn into leaves and eventually, a new stem. If nothing happens, they stay dormant.

This is the reason stem cuttings are so easy to make with Dracaena marginata. Propagating the dragon plant is almost guaranteed to succeed as long as the cutting doesn’t dry out or rot from too much water.

Credits for images shared to Nature & Garden (all edits by Gaspard Lorthiois):
Dragon plant roots in a pot by Rosalyn & Gaspard Lorthiois, own work
Rootbound by Maja Dumat under © CC BY 2.0
Meet the community
Need advice? Share your garden joys & woes!