Though increasingly regarded as invasive, in some gardens “Callery pear” is still worth keeping in good shape instead of pulling it out right away.

How to plant Bradford pear

Fall is always the best season to plant ornamental trees. It gives the roots time to spread underground throughout the winter. Here is a quick guide to planting trees such as Bradford pear. 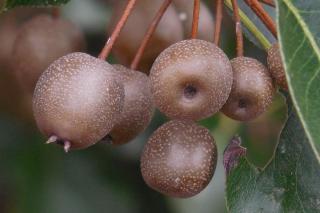 Bradford pear is an “all-or-nothing” tree when it comes to pruning. This means you should either not touch it at all for its entire lifetime, or, oppositely, start pruning it while young to shape it into a worthwhile specimen.

Indeed, branches tend to form clusters that compete with each other as the tree grows. Removing some of them after the tree has grown large will break the balance. The tree might appear gangly and deformed.

Always prune the tree in Fall, that way you’ll preserve the Spring blooming. Also, it’ll reduce the risk of having branches break off due to Winter winds.

The goal is to give the tree a classic single-trunk shape as high as can be.

It’s harder to succeed in “shrinking” a grown Bradford pear tree. Hatracking won’t do it any good. Best select and remove a couple branches on the outer portion of the cluster that seem to have the weakest joints.

You can tell a joint will be weaker when bark forms cracks and bulges between the branches.

Pests and diseases on Callery pear

It’s a very resistant tree, especially against fireblight. This was actually the reason the tree was brought to the United States in the first place.

Indeed, it was hoped that through cross-pollination, this trait would be passed down to other common pear trees. Sadly, however, it wasn’t possible to single out an offspring that wouldn’t also lose its fruit-forming appeal… 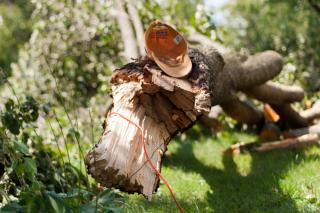 What usually brings the tree down is old-fashioned wind, since the wood breaks off easily.

A very fast grower, the growth speed leads the tree to its own demise: it breaks into pieces under its own weight after reaching 20 to 25 years of age.

As a consolation, you can use the wood for woodworking and for firewood: it excels in both!

The common name, “Bradford pear”, actually honors an American horticulturist who specialized in early orchard experimentation, Frederick Charles Bradford. He graduated at the University of Maine, and led the Maryland Agriculture department station where this particular cultivar was identified and replicated.

However, the botanical name derives from the Italian-French missionary, Joseph Maxime Marie Callery. The Callery pear is one of over 2,000 species of plants he sent from China for study to Europe in the 1840s!

The history of the Callery pear tree is rather well documented, in part because it has become such an invasive tree in the United States (and Australia, too).

These mostly result, indirectly, from seeds gathered in China by Frank N. Meyer (of Meyer lemon fame), grown in Oregon by F.C. Reimer, and other batches from the region gathered in the early Xth century.

Many more exist. Interestingly, the original Bradford pear didn’t (and still doesn’t) have any plant patent protection on it, so propagation isn’t restricted. Other named varieties often do, however.

This tree’s wood is very brittle and can’t cope with wind. Don’t set up any swingset or sandbox under the tree, you’ll risk an accident with children if ever a branch breaks and falls!

Fruit-inducing pruning
Fruit inducing pruning is an important step in the growth of your fruit tree and gives you control over its…
Scab, avoiding the disease
Often called apple scab, this fungus is responsible for important damage to this fruit tree, but also to plum trees…
Espalier training for apple and pear (2-minute video)
Apple and pear trees are regularly pruned to promote fruit-bearing. Did you know that shapes like palmette or espalier are…