Planting and pruning it is easy and will let you grow magnificent flowers in your garden.

Planting in spring, fall, winter and even summer is possible for specimens purchased in containers or grown from seed.

Gorse is extremely hardy. It can cope with winters where temperatures drop to around -20°F (-30°C).

Exposure and soil type for gorse

It will grow well in any type of soil, and can even colonize patches of heath. You can combine gorse with heath plants if you so wish.

Gorse, with all its spiky sharp leaves, is great as a protective hedge.

If you’re planting a hedge, provide for at least 3 feet (1 meter) from one specimen to the next.

Planting a field of gorse

If the area you live in has wide expanses that were previously overgrown with gorse, you can restore that amazing landscape by planting gorse shrubs again!

Once you’ve got a plot of gorse going, getting seeds isn’t a problem: a single acre (half-hectare) of mature gorse will release 50 million seeds every year!

As a member of the Fabaceae family, gorse produces seed pods. You can pick them when they start to dry.

Gorse seeds are very hard. Only one in ten will germinate naturally if sown immediately after collection.

There are four main ways of getting enough seedlings and increasing germination success.

After heat-softening and/or scarification, seeds should sprout after a month.

Once you’ve got seedlings, you can plant them in any season except if freezing or hot drought.

Pruning and caring for gorse

It isn’t really a requirement to prune, you can let your shrub develop naturally without pruning it.

If you wish to reduce the branches or reshape your gorse, wait for the blooming to end.

Regarding maintenance, let us say that gorse is a shrub that is so easy-going that it shouldn’t cause you any work at all after planting.

No need to fertilize gorse!

There isn’t much that can damage gorse – it’s a very resilient plant!

Occasionally, spiders may weave their webs around it to capture the many insects that the plant harbors and cares for. Note, this is different from red spider mite, which doesn’t much affect outdoor gorse. 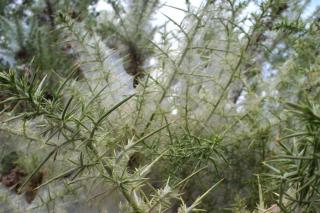 Occasionally an entire patch of gorse will seem wrapped up in thick spider-like webs. This is the work of the ermine moth, more specifically its caterpillar.

All there is to know about gorse 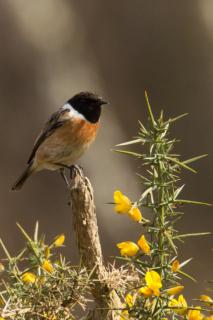 A magnificent shrub when it is in full bloom, gorse is marvelous thanks to its gold yellow blooming.

It is often encountered along the Atlantic coast, since it has the rare trait of resisting both wind and sea spray.

Also called thorny broom, its growth is rapid and its water needs are is low. It is contented with whatever nature gives it.

To create a flowered hedge, you can pair it with other flowering shrubs.

Gorse across the world

Gorse is part of the Ulex genus which numbers around twenty species in Africa and Europe. 7 of these are found in Europe, its native range.

The most common variety found along the Atlantic coast is European gorse (Ulex europaeus), and in Brittany there is Ulex breoganii.

In the British Isles, in addition to U. Europaeus, two more native gorse varieties are also to be admired: Western Gorse (Ulex gallii) and dwarf gorse, Ulex minor.

Along the Mediterranean, the Provence species (Ulex parviflorus) is the most common one. It has the earliest blooming.

Elsewhere on the planet, gorse was introduced as an ornamental plant, or for fodder and hedging for cattle and sheep. It was thus introduced in the Americas (East coast first, later West coast) both in Canada and in the United States in the 1800s.

In Australia and New Zealand, the primary use was pastoral. Indeed, the thorny hedges it forms was great to contain and protect herds.

However, both in the Americas and in Australia, gorse was declared invasive in many counties and states.

Today, gorse should not be planted in states along the Northern West Coast (Oregon, Washington, and British Columbia in Canada). Australia and New Zealand have also banned it outright.

Soap bush, spectacular blue blooming
Soap bush, with scientific name Ceanothus, is one of the most amazing ornamental shrubs thanks to the unique blue color…
Laurestine, a cute small shrub
Laurestine is a very beautiful shrub, the appeal of its flowers on par with that of its leaves. A List…
Setting up a flowered hedge
Hedges protect us from prying eyes, create intimacy, break the wind and protect our gardens. Flowered hedges boast many advantages…