Native alternatives exist to plant instead of invasive Scotch or French broom. They’re even more beautiful, if you consider that planting them restores habitats and creates balance.

The following shrubs are mostly native to North America. As such, they’re usually suitable for planting in your garden, in public spaces or in community gardens across the continent.

Note: these same shrubs might be invasive on other continents, though. For example, Australia, New Zealand, and Europe may see their own environment endangered if these shrubs were planted there.

Several among the following still do come from abroad. For example, cinquefoil is native to Europe and Asia. But its behavior is not invasive at all. When not from America, the shrubs below don’t display aggressive invasive traits, so they’re safe for planting.

5 Shrubs to plant instead of invasive Broom

Forsythia – Very early bloomers, among the first to greet us in Spring! Long, spindly sprigs laden with beautiful yellow blossoms – this is definitely the plant to send those invasive broom shrubs away! As an added benefit, you can even bundle twigs from the shrub to make garden brooms, too… Picture at top shows what such a shrub looks like in season, marvelous! 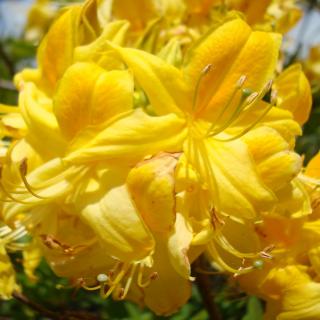 Rhododendron luteum – Not truly broom-like, but still bearing a massive cover of yellow flowers, this Azalea variety will shine for nearly a month. Though leaves appear early on in Spring, the blooming covers everything in a blanket of gold that is truly magnificent. Scented like honeysuckle, too! Care is identical to that of Japanese azalea 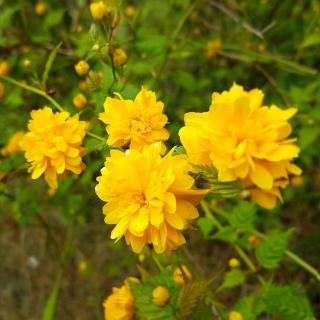 Kerria japonica – Together with Forsythia mentioned above, Kerria is probably the one that most resembles the invasive broom shrubs we’re trying to replace. In spring, clusters of flowers appear even before leaves do, giving the shrub a distinctive silhouette.

Each branch holds clusters of yellow pompoms, true cheerleaders for Spring to win the game against Winter!

Rosa acicularis var. sayi – This relative of dog-rose shares a delicious scent as it unfurls hundreds upon hundreds of beautiful pink flowers. Size is very similar to that of broom, at most 3 to 5 feet tall (1 to 1.5 meters).  You can even use its fruits called hips for their health benefits!

If you’re willing to depart from the spindly yellow shrubs, you’ll have many more species of shrubs to plant instead of French or Scotch broom. Here are a few of our favorites.

Also blooming with clusters of bead-like yellow flowers, Mahonia is a holly-like evergreen stays beautiful all year round. Leaves are a bit prickly, and its berries are edible (and delicious!). There are several fabulous varieties to choose from, too, such as the Mahonia eurybracteata (like the ‘Soft Caress‘). 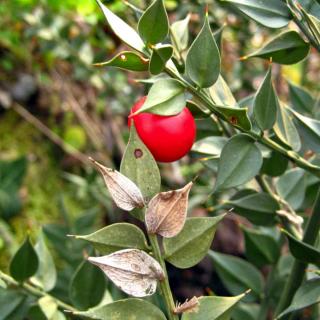 Ruscus aculeatus – This low-lying berry shrub has leaves that are very similar to those of French broom. What makes this little guy stand out is the bright red berries. They’re round as perfect marbles! Sprigs make for great brooms, too.

Although native to Europe, it’s not a very aggressive colonizer. It’s not an invasive threat to the Americas.

Double the joy with American elderberry, the fruits of which you can make delicious jam and jelly. This shrub is actually more of a small tree, so you’ll have to prune it to keep it small.

A native of the West Coast, Eleagnus x commutata has wonderful silvery leaves. A fast grower, it is very hardy and can cope with sea spray, too.

It’s important to be aware of which plants may be invasive in your area. A beautiful garden shouldn’t be a threat to the local environment!

French broom, a treacherous and invasive beauty
Horticulturists love its yellow blooming, but French broom (Genista monspessulana) is actually invasive in many countries. It's a dangerous fire…
Russian olive tree, an invasive species in America, how to control it
The Russian Olive tree, as opposed to the native American silverberry, is considered a highly invasive species in some parts…
Scotch broom, a powerful burst of color
Plentiful across Europe, Scotch broom is a shrub that bears wonderful flushes of yellow blooms in Spring. Key facts for…