Datura, also called “devil’s trumpet” for its magnificent inflorescence, is a very interesting and ornamental shrub.

It is vulnerable to freezing and loves sun to bear, all summer long, very beautiful flowers.

It is best to plant your datura in spring in a blend of earth, soil mix and soil conditioner.
Find a place in your garden that is protected from wind, but gets a lot of sun.

It’s possible to sow in a sheltered place starting in March and put in place in May.

If you live in an area where winter freezing is very cold (lower than 23°F or -5°C), consider growing your datura in a lean-in or transfer them during the coldest months to a spot where it doesn’t freeze.

It is really simple to propagate datura through cuttings, it’s the easiest and fastest technique.

Make sure the air stays moist around your cuttings. Either wrap a clear sac around the nursery pots to lock the moisture in (like a greenhouse) or increase ambient air moisture.

Pruning and caring for datura

Since it is easy to care for, the only bit of attention it needs regards watering: it must be watered often.

How to trim datura

How to water datura

Water regularly, but not too much, in times of high temperature. Spread mulch out at the foot of shrub over winter.

For potted datura, water must be provided as soon as the surface soil is dry.

Take note to protect your hands when pruning this shrub, because its leaves and stems contain high levels of alkaloids that are very poisonous.

In areas where it freezes, there’s no chance of your Datura surviving outdoors. It might take a night or two of very light frost, but cold temperatures for days on end will kill it.

If it gets any colder than 40°F (5°C), however, your best chance is to prune your datura short (under a foot or 30 cm) and dig it out to a pail or temporary pot.

If your datura is already in a pot, simply prune it to reduce its size and bring it indoors. Do this at the end of Fall, but before it freezes.

The ideal storage for it is a garage or room that only gets a little light and where temperatures stay around 55°C (12-13°C).

When Spring is there, wait for any risk of frost to have subsided. Then only can you bring your datura out.

Diseases and pests that infect Datura

Datura avoids problems with large herbivores thanks to its poisonous leaves, but insects and diseases still attack it.

Insects may also be to blame for spots and disease:

There are high amounts of alkaloid compounds in all parts of the plant. These powerful substances are very poisonous, even though they are also used as an ingredient for some drugs.

Ingesting Datura can induce severe hallucinating and may even lead to death. It is a drug, and selling it as such is crime liable to severe penalties.

The three most important compounds that the pharmaceutical industry uses are atropine, scopolamine and hyoscyamine (also known as daturine, incidentally). These all have anticholinergic properties. These molecules directly affect the way messages sent through the nervous system are interpreted by various organs. This is why they impact the senses like sight and hearing, and also affect dizziness and equilibrium.

Use gloves when you handle any portion of this plant.

Also, teach toddlers to avoid ingesting plants (maybe teach them to check with you first whether anything is edible or not, every single time).

Datura and pets (and horses)

As a consequence, make sure to keep pets away.

David, a Nature & Garden reader, noted in a comment below that horses are particularly vulnerable to datura. Indeed, if they’re curious or don’t have much else to feed on, they’ll sample the plant and start showing symptoms of intoxication… to a point that can explain why “death trumpet” is another name for this plant! 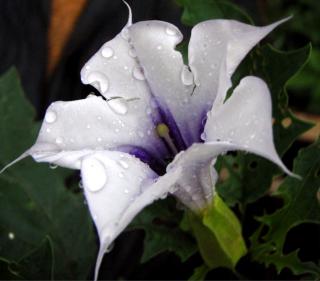 Native to Mexico and to the American South-West, there are about ten species that belong to the Datura genus.

It originated in the warm climates of South America and tends to have trouble adapting to places where it freezes often.

Quite often, Datura is confused with Brugmansia

Add small quantities of organic fertilizer often during the blooming to enhance it.

Physalis, a delicious edible berry
Physalis or Peruvian groundcherry is a plant that offers cute, perfectly edible fruits. Physalis basics in a few words Name – Physalis…
Petunia, perpetually fashionable
The petunia is a very cute flower that flowers early in spring and all the way to the first frost…
Cyphomandra, the tamarillo tree
Cyphomandra is a fruit tree native to the tropics. It bears delicious fruits with firm flesh and a tangy taste.…