Surfinia is actually a kind of hanging petunia that bears hundreds of small bell-shaped flowers. It is often used as a cascading flower to cover balconies and deck overhangs.

Flowering – May to October

Even though it is a perennial in warmer latitudes, in temperate climates it is grown as an annual but its blooming nonetheless lasts a long time.

It is recommended to plant this petunia in spring, after any risk of freezing is over, because it doesn’t survive freezing well.

Sowing seeds from a surfinia

Surfinia plants may produce seeds, though less than regular petunia. These seeds might also be sterile, since the plant is a hybrid (see the surfinia origin story below). However, experience shows that surviving seeds will also be very beautiful! Simply, they’re a new kind of petunia and not the actual “Surfinia Petunia ®” anymore.

Whether the plant is in a container or in the ground, select a sun-filled spot for maximum blooming.

Pruning and caring for surfinia

To enhance flower-bearing, you can remove wilted flowers regularly.

During spells of high temperatures, feel free to water in the evening to avoid having your petunia dry out. 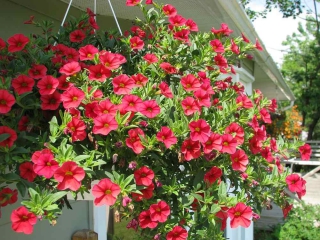 The Surfinia Petunia ® is a petunia hybrid that has the special trait of cascading down. Evidently, this makes it a great choice for suspended pot arrangements!

It shares with us the gift of bearing beautiful flowers for a long time.

It is a kind of weeping, cascading petunia that produces rolling swaths of flowers.

Since it is easy to grow, it will develop well in garden boxes, suspensions and also directly in the ground.

The blooming spreads from the beginning of spring until fall. It loves sun and well-drained fertile ground.

Where does surfinia come from?

The origin of the surfinia plant dates back to 1987. Surfinia was bred in Japan by Suntory Flowers. Initially, it started as a vigorous wild petunia discovered in Brazil. Dr. Sagazaki hybridized it with other petunias so that the many colors we see today could arise.

In short, the surfina is a petunia that gained a trailing habit and an excellent resistance to disease and other hardships. Even today, new patented varieties are developed and propagated through cuttings by growers across the world.

The word “Surfinia” is a trade name, and it refers specifically to plants multiplied through cuttings. Any seeds from these flowers that grow into flowers won’t be exactly the same because of cross-pollination, so they can’t be called “surfinia” anymore. They are, however, petunia!

Flower your garden, balcony or terrace with surfinia for a landscape that is full of colors!