Brugmansia, also called “Angel’s Trumpets” for the magnificent flowers shaped like trumpets, is a very interesting and ornamental shrub.

Brugmansia care is easy as long as it doesn’t freeze in your area.

It is best to plant your brugmansia in spring in a blend of earth, soil mix and conditioner.

It’s possible to sow in a sheltered place starting in March and put in place in May.

If you live in an area where winter freezing is very cold (lower than 23°F (-5°C)), consider growing your brugmansia in a lean-in or transfer them during the coldest months to a spot where it doesn’t freeze.

Pruning, and caring for brugmansia

Pruning at the beginning of spring should push your brugmansia to grow more dense and trigger beautiful blooming.

Brugmansia can bear pruning well, so it can be quite drastic.

Take note to protect your hands when pruning this shrub, because its leaves and stems contain high levels of alkaloids that are very poisonous.

Watering and adding fertilizer to your brugmansia

Water regularly, but not too much in times of high temperatures and spread mulch out at the foot of shrub over winter.

Adding special rose tree fertilizer is particularly adapted to growing brugmansia. Dilute it in water and apply in every other watering during the growth period. 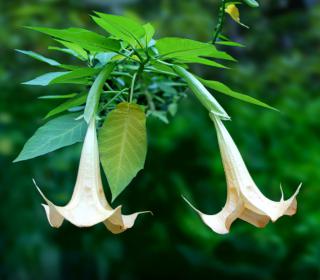 The trumpet vine loves climbing high, so it’s perfect to dress the top of a pergola and gift the area with shade.

Brugmansia was discovered by botanists Alexander von Humboldt and Aimé Bonpland when they scoured across South America at the beginning of the XIXth century.

It is thus native to the Andes, but it can also be found in the wild from the Antilles to Oceania.

This magnificent shrub with remarkable blooming produces abundant and fragrant trumpet-shaped flowers.
It originated in the warm climates of South America and tends to have trouble adapting to places where it freezes often.

Difference between Brugmansia and Datura

You can tell Brugmansia apart from Datura by looking at the flowers: brugmansia flowers hang down whereas datura flowers face upwards. Also, brugmansia tends to grow into shrubby shapes, whereas most datura varieties are rather herbaceous plants.

Add small quantities of organic fertilizer often during the blooming to enhance it.

Physalis, a delicious edible berry
Physalis or Peruvian groundcherry is a plant that offers cute, perfectly edible fruits. Physalis basics in a few words Name – Physalis…
Datura or Brugmansia, Trumpets of discord
Brugmansia and Datura look alike, but they are actually different plants. Here are a few tricks to tell them apart.…
Eggplant, abundant till the end of summer
Eggplant is a delicious vegetable / fruit, a must-have in any vegetable patch. A summary of eggplant facts Name –…