Spring bloomers for the most part, small-flowered Clematis varieties are often more vigorous than summer ones.

You’ll find it easy to cover an entire wall with these, and they’ll help bring color to a mixed hedge. Even pair one with a somewhat invasive rose tree to slow its spread while adding early flowers! Not to mention the fragrance that large-flowered clematis don’t boast.

Foliage – deciduous or evergreen
Flowering – between March and September 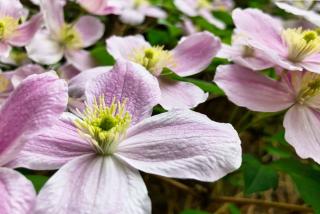 Native to the center of China and to the Himalayas, this clematis is very hardy. In May, a cloud of white or pink flowers about 1 to 2 inches across (3 to 5 cm) literally covers the upper portion of the foliage for 3-4 weeks. Flowers will appear on stems that grew last year, which means you shouldn’t prune during the winter but after the blooming instead. Some varieties release a pleasant fragrance, namely ‘Fragrant Spring’, ‘Mayleen’, ‘Odorata’…

It takes 3 to 5 years for the plant to reach a respectable size. As is the case for all Clematis vines, tendrils will let the plant latch on to other plants or lattices on their own. It helps to untangle them during the growing phase to spread the plant out: this will keep plants they grow on from getting smothered under a thick clump. Plant these near a wall that’s facing South-East. 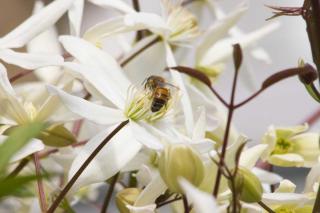 This Chinese clematis blooms as early as March-April, it’s among the earliest bloomers. The foliage is evergreen, with 3 long leaflets that boast a prominent vein and shiny green leaves. A profusion of pure white star-like flowers will release a delicate fragrance that smells like a blend of vanilla and orange flowers: definitely charming!

It can grow 25 feet tall (8 m) and spread to twice that size sideways (16 m). Plant it against a sheltered and sunny wall: even though it’s hardy, it’ll still grow better. ‘Apple Blossom’ is a cultivar that has pinkish-white flowers. 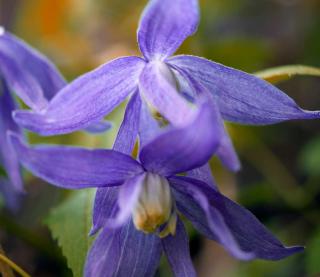 The Alpine clematis is a not-so-vigorous species, which makes it perfect for growing in pots. It will spread to cover a balcony and its stems will flow over the edges, covering it all in flowers in April-May. Flowers are drooping and bell-shaped.

Some cultivars such as the ‘Francis Rivis’ are lavender blue, while others like the ‘Ruby’ are bright pink. The foliage counts 3 pointed, serrated leaflets, and makes the landscape look lush in all seasons with its spring-green color. Plant it in a container that’s 1 to 1½ feet deep (30 to 40 cm). 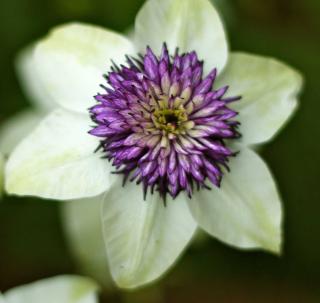 This delicate slow grower is also a favorite for container growing. Green-tinged white starry flowers with surprising violet leafy stamens bloom one after the other from June to September on new growth.

The central dome that the stamens form will remain on the plant even after the petals fall off. Plant it against a warm wall. 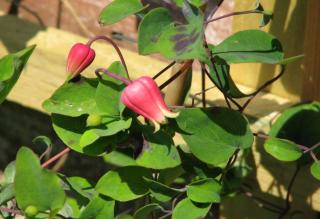 This clematis is somewhat unique, thanks to the near-red color of its flowers. The ‘Gravetye Beauty’ cultivar, in particular, forms 3 to 4-inch urns (7 to 9 cm) with white undersides. More classic, the ‘Princess Diana’ boasts magenta-red flowers that are a little smaller, 1½ to 2 inches across. It blooms later in the season, from July to September.

The smooth, glaucus leafage is also composed. Unlike the clematis mentioned above, this one must be pruned in winter since it sprouts back from the stump every year anyways. Use it to creep under low shrubs like heather or lavender, or to fill spots along a bare wire fence.

Plant these clematis from October to May in soil that you’ll have loosened deep down. Mix in both sand and leaf compost.

To have better blooming, add a fair layer of fresh manure as mulch, without setting it in direct contact with the roots, though.

Prune these right after the blooming, except for Clematis texensis.

Pruning off stems that have lost their flowers will help get a more compact and spectacular appearance as new flowers appear, but doing so isn’t obligatory.

Credits for images shared to Nature & Garden (all edits by Gaspard Lorthiois):
Covered in white by TheUjulala under Pixabay license
Pinkish white by Talpa under Pixabay license
Bee feeling welcome by Rictor & David under © CC BY 2.0
Clematis with violet blue petals by jayscratch under © CC BY-SA 2.0
Violet heart by Rob Thurman under © CC BY 2.0
Pink bells by Steve Law under © CC BY-SA 2.0
Meet the community
Need advice? Share your garden joys & woes!
Live from the forum
What to do in aftermath of freeze for clematis armandii?

The poetic charm of a dressed pergola
Summer sends its scorching heat out but one spot in the garden offers a cool atmosphere which is perfect for…
6 fabulous fragrant clematis
Clematis is a famous climbing vine. All varieties bear beautiful flowers. Some also add a delicious fragrant scent to their…
Climbers that keep their leaves in winter: an evergreen vine selection (with bloomers, too!)
Very useful on a deck, balcony or terrace, evergreen climbing vines help create a cocoon of greenery. These also produce…