It is ideal to plant blackthorn in fall to boost root development before winter.

You can still nonetheless plant your blackthorn in spring if you’ve purchased it in a container.

Take note that blackthorn is… full of thorns, place it well so that you won’t be pricked too often when passing by!

It is thus also ideal to create a tough defensive hedge, on top of its ornamental appeal.

Care and pruning of blackthorn

Caring for blackthorn is very easy because it is a shrub that requires quasi no care once it has settled in correctly.

Blackthorn is one of the faster-growing shrubs. In the first years of growth (it matures and slows after 10 to 15 years), it can grow up to 2 feet a year, with a minimum of 1 foot when conditions aren’t perfect (60 and 30 cm, respectively). Pruning, of course, reduces overall height, but makes up for it by creating a lusher, denser bush. Indeed, each cut twig will sprout from 2 to 4 new branches lower down.

If you must prune or cut back your blackthorn, avoid proceeding after the blooming, or you won’t be harvesting any fruits.

If your blackthorn turns invasive:

Blackthorn can cope well with severe pruning, hatracking and even being cut down to the stump.

Caution: blackthorn spikes can be over 4 inches (10 cm) long, are very sharp and very strong.

Sloes appear on the tree after the first blooming, usually in the third year of growth. Only a handful make it the first year, but the following years already provide abundant harvests.

It is very easy to harvest sloes from the blackthorn but, be careful, these fruits only really have any value if harvested at exactly the right time.

Sloe is astringent and bitter and doesn’t have much culinary value if harvested too early.

Sloes will keep for a short while if dried out in the sun, but best is to freeze them and thaw right before cooking. 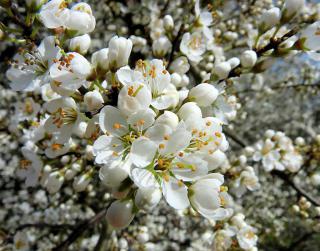 Blackthorn, also called sloe bush, is part of the large Prunus family, like the apricot tree, plum tree, almond tree, peach tree and cherry tree. It actually can be used as a graft-holder for apricot trees, plum trees and peach trees.

Birds love building nests in the tree. The sharp thorns protect eggs and hatchlings from predators such as cats.

Often used to create defensive hedges, its bountiful fruits are sometimes forgotten, which is a shame because they are delicious after they’ve frozen through.

Its early blooming is simply beautiful, covering the tree even before leaves have appeared. This gives the tree a serene, meditative bearing, much like that of a Japanese garden.

Sloes are astringent if harvested too early, but always have high vitamin C contents as well as organic acids and tannin compounds.

Sloes enter into the preparation of very many recipes for spirits, wines and jams.

During the beautiful spring blooming, you can snip a couple branches off from your blackthorn and arrange them in a large vase, the decorative impact will impress all!

Medlar, a fruit tree to rediscover
Medlar is a fruit tree that has long been forgotten but deserves to be rediscovered by all! Main Medlar facts…
Black goji berry, a power-packed goji berry species
Black goji is a a different species than the more famous red goji berry, but it shares similar growing habits…
Quince tree, where the quince comes from
Quince tree is a very beautiful fruit tree, that bears nice fruits called quinces. Key Quince facts, a short list…