Home » Gardening » The fruit Orchard » Kiwi, from planting to an abundant harvest

Kiwi is a delicious fruit to savor and it’s also full of vitamin C.

A summary of kiwi facts

Discover how to grow Actinidia, the kiwi tree, and produce nice kiwis as seasons come and go.

Kiwi is preferably planted in spring, especially in regions with harsh and cold winter weather.

In milder, more temperate climates, you’ll also succeed if planting your kiwi in fall, of course checking that it won’t be freezing in the following few weeks.

Although most people regard it as an exotic, tropical fruit, kiwi can grow in temperate climates and productivity can be impressive when pollination was successful. 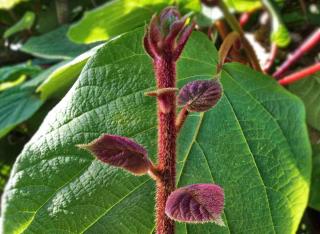 Kiwi is a fruit vine for which pollination is crucial and probably the most difficult practice to master.

First of all, you’ll have to plant 1 male specimen in a cluster of 4 to 5 female specimens, or, simply stated, you won’t have any fruit.

Wind often isn’t enough to ensure pollination, so you’ll have to invite bees over for the work to be done.

The first kiwi fruits appear after several years, usually at least 4 to 5 years.

Note that male and female specimens can be told apart by looking at the flowers:

Self-pollinating kiwi varieties have also been developed. They bear both male and female flowers on the same stem. One such variety is the ‘Solissimo’.

However, self-pollinating kiwi varieties tend to be much less productive, according to those who have actually tried planting them. Cross-pollination works much better.

Growing and caring for kiwi

After having planted your kiwi and provided proper growing conditions, there are a few thing you must check on every now and then.

1 – Training your kiwi is the first thing to do, because this vine doesn’t wrap up around any lattice on its own.

2 – Kiwi needs water, especially during the first years after planting.

4 – Lastly, winter protection for cool climates in winter can be relevant.

Pruning kiwi plays an important part in fruit formation for your actinidia.

The right time to prune your kiwi plant is after the harvest, anytime from December to February while avoiding frost spells.

In summer, it also makes sense to prune your kiwi to guide its prolific growth. The ideal timing is generally July, when fruits aren’t yet much larger than cherries.

Video tips on how to prune a kiwi vine: 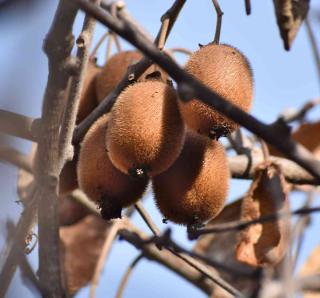 Kiwi, in the Northern hemisphere, is harvested before the first winter frost spells, most often sometime in November.

A good way to know if your kiwi is mature enough for harvest is to run your nail on the surface of the fruit: if it yields under that slight pressure, the time is ripe.

Kiwi fruits won’t resist the cold in winter, so everything must be harvested before the first onslaught of freezing bouts.

Productivity can be exceptional, even in places with shorter summers: in the United Kingdom, Northern France and in Northern US states, just two or three mature specimens can give you up to 200 pounds of harvest (100 kg).

The richer the soil, the greater the harvest.

How to keep kiwi fruits for longer

To keep your kiwi fruits over the winter as long as possible, store them in a cool spot (40°F (5°C), give or take a few degrees) and well ventilated. You’ll see that they’ll keep for several months and still be as savory as ever.

The first kiwi harvest, however, will only occur after a few years. Usually, this means you have to wait at least 4 to 5 years.

Many gardeners have let this climbing vine run wild, and their garden got smothered in it. Remember to prune it regularly.

Chayote, a run-around vine that’s edible all around
Chayote is an exotic vine that produces large pear-shaped fruits that are very nutritious. Chayote key facts Botanical name –…
Blackthorn, delicious wild berries
The Blackthorn fruit tree produces surprising fruits, sloes, that are always best when they've burst just after the first frost…
Apple tree, the joy of biting your own sweet, crunchy apples
The apple tree is among the most common fruit trees found in our orchards. A summary of Apple tree facts…