Vinca is a plant genus that’s part of the dogbane family. Two kinds of Vinca exist, major and minor.

This is among the easiest plants to care for, except if your area is prone to drought. In that case, you’ll have to work hard to keep Vinca happy! Both types of Vinca require similar care.

Usually you’ll be purchasing Vinca in a pot, perhaps with flowers already so that you’re sure which variety you get. The natural growing environment is along riverbanks, so best try and reproduce that.

How to plant Vinca in the ground

Consistent moisture is what you’ll need to provide, so don’t put this plant in the driest spot of your garden!

Space plants by 12 inches (30 cm) when preparing a flower bed.

Vinca will do very well in containers and pots, provided that:

Indeed, drought would kill your potted vinca within a few days if left unwatered. Consider adding hydrogel crystals to the potting soil to cover for the occasional forgotten watering session.

Seeds will appear on flowers unless they’re deadheaded. Certain garden store varieties are hybrids and their seeds might not set or grow. Nonetheless, if you do get seeds, it’s easy to sow vinca:

If there are many slugs or snails, wait for the plants to have at least 4 pairs of leaves before thinning or transplanting. Protect them well because those fresh leaves are very appealing to gastropods!

After planting, in the ground, water abundantly and immediately. If you have a cover of mulch, it may be enough to water once a week, but if you notice the soil is dust-dry an inch underground near your periwinkle, water right away.

Best practice is to water at ground level or with an irrigation system so that leaves don’t get wet. This staves off appearance of leaf diseases. In dry climates, you might even set up an underground mini-aquifer! 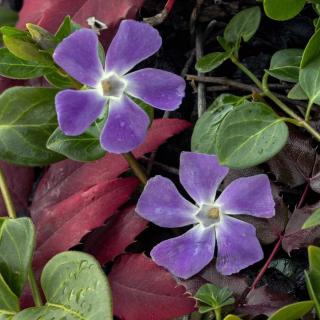 You can let this plant grow freely, it doesn’t need any pruning.

As a vine, Vinca major might go in places you don’t intend it to. Redirect growth along a lattice or trellis, or snip stems off when not to your liking. Snipping stems will lead to branching and make your plant more lush and dense.

For a particularly bushy container vinca, snip or pinch stems every 3 leaf pairs as it grows. Do this to each consecutive branch for 3 to 5 weeks early spring, and you’ll have loads of flowers later on!

Vines and stems that bend back to the ground will take root and spread from there. Its a natural manner of propagation, similar to the layering of strawberry runners. This makes the plant rather invasive in non-native environments since it can spread fast.

Fertilizer will make for more vigorous blooming and growth, but vinca will still do fine in poor soil. If you do fertilize, only fertilize two or three times in Spring, at one-month intervals.

Water directly at soil level, especially during the summer, or powdery mildew might develop on leaves.

Although vinca is a riverside plant, it’s vulnerable to root rot if ever the soil doesn’t drain well. 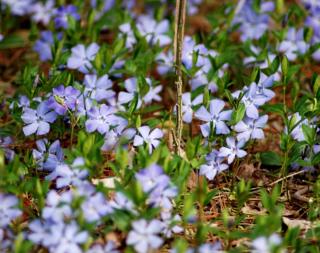 Vinca major grows taller, hence the botanical name. It typically grows all over itself to a height of 2 feet (60 cm). However, vining vinca finds a shrub or treillis, it’ll start inching upwards. It isn’t as prolific a climber as other vines, though. Plants like Mandevilla or jasmine climb much higher.

Usually, flowers are from a range of violet-blue. Interestingly, nurseries are able to offer white or red varieties nowadays.

A shorter growth is what distinguishes Vinca minor. It usually tops out at around 1 foot (30 cm). This is really ideal for ground cover, as it will sprawl all over the place without endangering shrubs. An excellent plant to replace lawn grass with.

Apart from size, which is sometimes hard to judge, there is one key difference between the two. Looking at leaves, you’ll see the edges are different. They’re both smooth, but Vinca major has very tiny hairs along the edge. Vinca minor doesn’t.

Having trouble remembering which is which? Just remember that a boy reaching his MAJORity grows hair everywhere, whereas a MINOR doesn’t!

A plant that looks very similar to Vinca is Madagascar Periwinkle (Catharanthus roseus). It used to be called Vinca roseus because botanists long thought it was the same plant! But actually, Madagascar periwinkle is the tallest of the three, and is also more drought-resistant. It isn’t related to the two Vinca plants and cross-pollinizing them won’t bear fruit.

Another vinca look-alike is the Impatiens family, especially the Sunpatiens flower. The main difference is in the leaves: those of impatiens are jagged with small teeth, whereas Vinca leaves are smooth and continuous.

Vinca is often among the first flowers to bloom in Spring, right after the early bulbs. Native to Europe, this plant is now naturalized in many parts of the Americas. Botanists and gardeners rate it with a high ornamental value. It was actually brought to the United States around the 1700s, in part for its beauty, and in part for its medicinal value.

In some areas that most resemble Vinca‘s native habitat, such as along riverbanks, it actually crowds other plants out. This has led to the plant being declared as invasive in states like California (V. major), and many Eastern states (V. minor) such as Kentucky, Tennessee, Georgia, South Carolina, Virginia and Pennsylvania.

Use the long, twining vines to weave wreaths of flowers for children!

Trendy with good reason: ornamental olive
It is the symbol of the Mediterranean, and has conquered gardens across the world. A symbol of immortality, hope, and…
Planting a katsura tree – tips and tricks to make sure it thrives!
The katsura tree is an easy tree to satisfy. All it needs is rich soil and significant water reserves. Katsura…
Damping off – what to do when seedlings die off
When seedlings die off at a very early stage in life, chances are it's due to a fungus in the…