Madagascar periwinkle is a herbaceous plant native to the island of which it bears the name.

Foliage – evergreen (in warm climates)
Flowering – May to October-November

It will provide you with very cute blooming in summer. Formerly, the plant went by the names Alcea rosea and Vinca rosea. This is why the name “Vinca” pops up quite often.

The Madagascar periwinkle is native to the island of Madagascar which has a tropical climate.

But it’s also possible to grow Madagascar periwinkle as an annual from May to October without any problems at all.

To grow Madagascar periwinkle in a pot, it is advised to re-pot every 1 or 2 years, preferably in spring.

The pot provided upon purchase will quickly become too small: re-pot your Madagascar periwinkle as soon as its blooming is over.

It’s easy to sow the seeds:

If there are many slugs or snails, wait for the plants to have at least 4 pairs of leaves before thinning or transplanting.

Pruning and caring for your Madagascar periwinkle

If you’re growing your Madagascar periwinkle outdoors like an annual, simply pull the plant out once the first frost spells have hit. It wouldn’t survive the winter anyways.

If growing a Madagascar periwinkle indoors, in pots, you’ll have to prune it on a regular basis. Doing this helps increase blooming and controls its growth.

Madagascar periwinkle is typically grown as an annual plant in temperate climates. It isn’t a hardy flower.

Growing Madagascar periwinkle in a pot or container

Choose a very well-lit space for your Madagascar periwinkle, but not in direct sunlight behind a window.

Water regularly but not too much, to avoid suffocating roots.

Finally, bring your shrub outdoors from May to October to give it fresh air.

When in a pot, Madagascar periwinkle needs a lot of moisture. It loves resting over a tray of wet clay marbles or gravel. Indeed, this recreates its natural environment.

The usual blooming season for Madagascar periwinkle extends from May to October.

Madagascar periwinkle leaves turn yellow most often when they were exposed to the cold or to lack of water.

If a cottony white substance starts covering the leaves of your Madagascar periwinkle, it means a scale insect colony has appeared.

Madagascar periwinkle can also be colonized by mites and ticks such as red spider mites.

In the wild, only two colors exist: white and pink. Today, through cultivation and breeding, many new colors exist: red, peach, apricot…

This is a very simple plant to care for. It is perfect to cover flower beds. Excellent for very sandy soil.

There is no need to remove dead flowers, they will simply fall off and quickly give rise to more!

This flower has been bred and cultivated for almost a hundred years. In the wild, only two colors can be found: purple-pink and white. In the 1920s, horticulturists started identifying promising Madagascar periwinkle varieties both tall and short.

Initially, breeders tried to expand the range of colors. Today, newer varieties are better at resisting disease, drought, cold and heat… thus generating savings for landscapers and hassle for owners!

Roots of this ornamental flower contain alkaloids. Research is ongoing that shows these compounds effective in treating cancer!

Madagascar periwinkle is different from common periwinkle, which has the scientific name “Vinca”.

Also, this plant is similar to Impatiens (and to sunpatiens). To tell them apart, look at the center of the flower and the rim of leaves.

Another look-alike is Vinca, the common periwinkle.

Smart tip about the Madagascar periwinkle 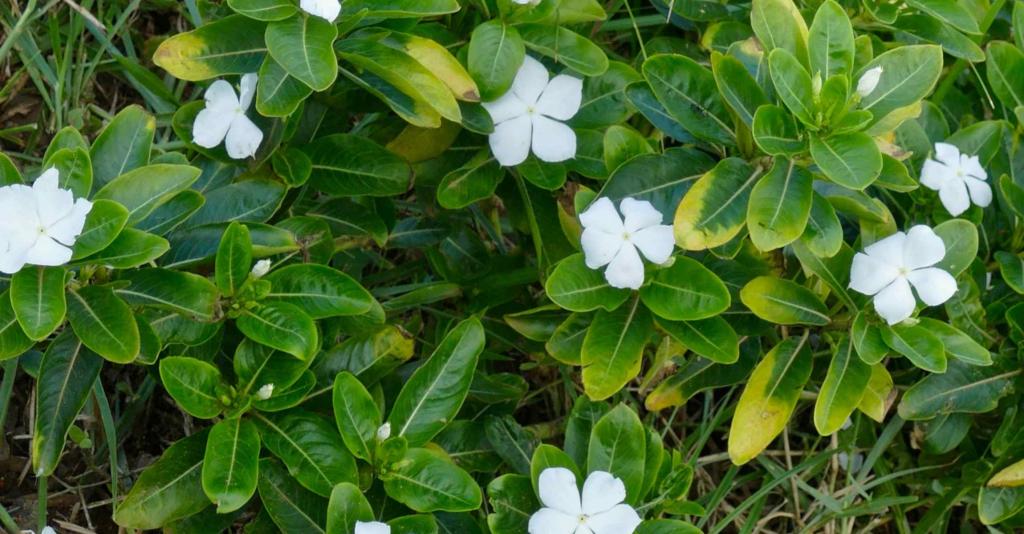 Credits for images shared to Nature & Garden (all edits by Gaspard Lorthiois):
White sprig by Paul and Jill under © CC BY 2.0
Madagascar periwinkle bush by Bernard Dupont under © CC BY-SA 2.0

Stephanotis, VIP fragrance
Stephanotis (or Madagascar jasmine) was the favorite plant of Marilyn Monroe. The blooming does require a little care, but its…
Oleander, the South brings sun to the garden
Oleander is a beautiful shrub that blooms all summer long. Summary of key Oleander facts Name – Nerium oleander Family…
Adenium, the desert rose
Adenium is a plant used indoors for its appealing blooming and its surprising ornamental qualities. Adenium facts in a nutshell…