Caring for this plant, from planting to pruning and including watering, will give you magnificent flowers in summer. Follow our advice and your Dipladenia will bloom magnificently!

How to plant a Dipladenia

Dipladenia usually is an indoor plant in temperate climates. However, it’s possible to grow it outdoors as an annual in places where the weather is too cold.

Growing Dipladenia indoors in a pot

If potted, it is advised to repot every 1 or 2 years, preferably in spring.

The container that was provided upon purchase is often too small to last more than a season. Repot your dipladenia as soon as the blooming is over. 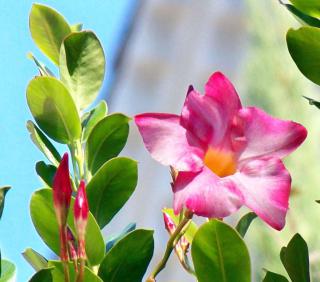 South America is where Dipladenia originated. It therefore requires temperatures of at least 68°F (around 20°C) to thrive.

When growing directly in the ground, temperatures must be high in both summer and winter. Planting is done in spring.

Dipladenia prefers it on the dry side than on the wet side for its roots. However, when potted, it’s important to not let the soil get too dry or the plant will feel water stress.

If you’ve repotted your dipladenia recently,

In normal conditions, a potted dipladenia should cope with only being watered once a week. But pay attention to signs that may show it needs more water:

If you notice any of these symptoms and that the soil is often dry, best increase watering frequency. In extreme cases like temperatures over 100°F (35°C) with very little air moisture, you may even need to water a potted dipladenia daily. Perhaps increase the amount of water, too.

Watering dipladenia in the ground

In winter or during the dormant season, water less, only once a fortnight, with only very little water. Usually rain covers the plant’s needs so you probably won’t need to water at all.

Growing and caring for potted Dipladenia

Indoors, select a very well-lit space for your dipladenia, but not in direct sunlight behind a window.

Finally, bring your dipladenia outdoors from May to October to give it fresh air.

When potted, dipladenia requires a lot of moisture. A good trick is to place it on a bed of constantly moist gravel or clay pebbles, since this recreates the moisture found in its its natural tropical environment.

The usual blooming season for Dipladenia is March to November.

After blooming, its is best to winterize your plant: place it in a cooler but well-lit room. 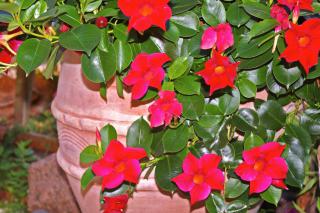 Native to the tropical Americas, Dipladenia is a sub-species of the Mandevilla vine. It’s part of the same family as oleander and it blooms in abundance over many months with beautiful flowers.

Dipladenia grows best as a ground-seeking hanging vine, although it’s perfectly possible to train it up along a lattice like its cousin, the mandevilla vine. When left untethered, flowers will cascade down from hanging suspensions or balcony railings and produce a marvelous effect.

Because of its tropical origin, greenhouses with high moisture levels are the perfect growing environment. If you wish to grow dipladenia in apartments or indoors, mist leaves often with soft water. You would make your plant happiest if you tried various techniques to increase indoor humidity.

Pests and diseases related to Dipladenia

Dipladenia leaves most often turn yellow when they were exposed to the cold or to lack of water.

Tiny spiders crawling all over the dipladenia

Dipladenia can also be colonized by mites and ticks such as red spider mites.

Some are more suited to growing in garden boxes since they tend to stay upright and bushy. The Dipladenia Rio is one of these. It will form a mound that can reach about two feet across in ideal circumstances! It is available in many shades: velvet red, deep red, pink, white…

Others are excellent viners, like the Madinia Maximo series: they’ll be great in hanging suspensions or in the ground near a lattice. The “Opal” series (opal yellow…) is closer to Mandevilla types than to Dipladenia, but it’s sometimes sold as such. It has rare colors: yellow, salmon orange…

Adding fertilizer during the blooming period will increase the number and beauty of flowers.

Credits for images shared to Nature & Garden (all edits by Gaspard Lorthiois):
Pair of Dipladenia blooms by Angelo Brathot ★ under Public Domain
Dipladenia with leaves by Marie-France Sugier ★ under © CC BY-NC-SA 2.0
Dipladenia in terra cotta pot by Kerstin Riemer ★ under Pixabay license

Meet the community
Need advice? Share your garden joys & woes!
Live from the forum
Question about pruning the tropical vine tenrils of the Dipladenia.

Oceanblue morning glory, electric blue flowers
Oceanblue morning glory is a very cute climbing vine with abundant and spectacular blooms of a mesmerizing deep blue color.…
Jasmine, a very fragrant vine
Jasmine and its fragrant smell are enchanting and exotic. Here is what you need to know about jasmine and tips…
Climbing nasturtium, easy flowers
Nasturtium is a climbing vine famous both for its blooms and for the speed with which it develops. Main facts…