The Russian Olive tree, as opposed to native American silverberry, is a highly invasive species in some parts of the United States and Canada.

The latin name of this tree is Elaeagnus angustifolia. Though it looks very similar to the common olive tree,  they belong to different plant families. Getting rid of Russian olive is very labor-intensive but quite straightforward.

This short tree is actually native to central Asia and Eastern Europe. Reports of its use date back to ancient Persia and India, since edible Russian olive fruits were harvested for oil.

This hardy and vigorous plant spread to many parts of Europe, and until today, Russian olive is used there as an ornamental and useful shrub.

The many qualities of Russian olive set the stage for its introduction in North America: a fast-growing, resilient plant was needed to stave off erosion. In the early XXth century (1900s), horticulture stores imported Russian olive and sold it to their customers. It helped mark property edges, stabilize river banks, provide melliferous flowers for bees and serve as wind-resistant ornamental hedges.

Russian olive then started spreading and overcrowding native vegetation. The very reasons for which it was imported led to an imbalance in local vegetation. Upcoming generations are now learning to control Russian olive, truly a force unleashed by their forefathers. 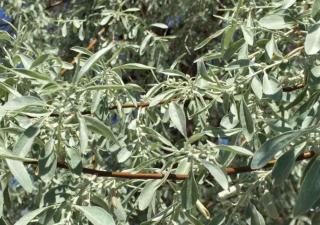 What makes dealing with this plant quite difficult is that it’s also very appealing. Fruits are useful and the fragrance is nice, so it’s difficult to raise awareness about the invasiveness of Russian olive.

Moreover, getting rid of Russian olive is a bane because of its thorns and the vigorous growing back. Even persons who understand the issue don’t easily engage into the work-intensive labor required.

But it actually isn’t so difficult to reduce Russian olive infestations once your mind is set to it.

In both the United States and Canada, local governments where the plant has become invasive have added Russian olive to their noxious weed list. The local Department of Agriculture can inform you on whether your area is subject to restrictions on growing Russian olive.

Possible restrictions can be that:

Usually, local ordinances and governments can support taking action through:

How to stop invasive Russian olive

As said earlier, it’s very labor-intensive to wipe out Russian olive trees over a wide area. However, it is possible, and the recommended method to kill Russian olive without endangering native plants is the cut stump method.

Remember that if you don’t apply the herbicide, the Russian olive will grow back even more vigorous than before. High-strength vinegar will do the trick.

A few tips on how to make weeding out Russian olive easy:

Other ways to remove Russian olive

Other weed removal solutions are ineffective against Russian olive, unless conducted by professionals. So don’t try to ignite fires, spray herbicide on vast areas, or simply cutting without using herbicide.

Some pest control specialists advocate for using fire to control Russian Olive. This is possible, but it only works in rare circumstances. 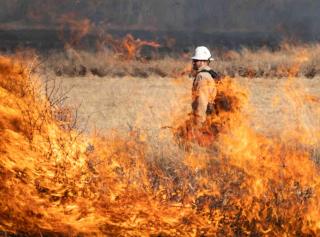 Indeed, russian olive can sprout back from roots and stump after burning, especially where soil is deep. Precautions for this technique to work are:

Incidentally, Russian olive is a great species for firewood, so collect any logs, dry them off (at least one whole year), and you’re set for winter!

Since Russian olive also propagates through cuttings and layering, don’t keep cut branches laying around in moist, fertile soil: some might sprout again. Gather them up and dispose of them diligently.

Staghorn tree – amazing in spring, fall and winter
Staghorn sumac, also called vinegar sumac, is a short tree that grows in a roundish shape. List of key staghorn…
French broom, a treacherous and invasive beauty
Horticulturists love its yellow blooming, but French broom (Genista monspessulana) is actually invasive in many countries. It's a dangerous fire…
Biological control of Russian olive
There is, as of now, no perfect solution for biological control Russian olive through predators or parasites. When a particular…