When seedlings die off at a very early stage in life, chances are it’s due to a fungus in the soil.

“Damping off” is the term that describes this infection.

Seedlings collapse, lose their leaves, turn yellow and wither leaving a blackish-brown stem behind. The key is to avoid soggy soil.

Damping off usually occurs before the first true leaves appear.

There is no hope to save seedlings from damping off once the blackish color appears.

However, there is a slight chance of saving a few seedlings when you catch the damping off at an early phase. If you’ve only reached the point where stems and leaves sag and turn pale, the seedling can still recover.

Damping is the result of fungus attacking and infecting the young seedlings. It’s a fungal disease. 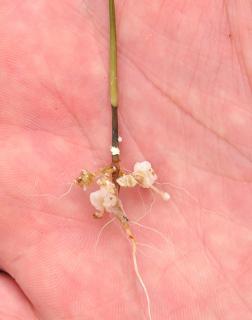 The fungus, almost always dormant in the soil, penetrates the plants through the roots and then works its way up through the young stem.

The infection spreads quickly through the plant, and in a single day a seedling can go from sagging to dead.

Fungus that cause damping

There are four main species of fungus that cause damping off.

Usually the one or the other is responsible, because fungus typically operate on a “winner takes all” basis. The first to colonize a patch of soil or plant will fend off competing fungus.

You’ll come across these fungus whenever a plant is weakened. Indeed, they’re almost always present in the soil and on leaf and trunk surfaces.

Fungus always flare up when growing conditions stress the plant. The best way to avoid fungus is to make sure the environment suits the plant’s needs.

Even in grown plants, these fungus might strike. Take a look at this infected Sunpatiens, for instance.

Treatment and cure for damping

Saving seedlings that started damping off is very difficult and often unsuccessful.

Sprinkle ground wood charcoal in a thin layer over the growing bed. A very fine coating is enough, like dust on furniture.

After that, simply take great care not to overwater. Provide plenty of indirect light. Ventilate to make sure the soil never gets soggy.

Prevention is the best course of action, since recovering sick seedlings is rarely successful.

Outdoors, if the weather is very wet for days, protect seedlings from rain with a tarpaulin or piece of plastic hung above the growing bed.

Make sure your seeds come from a good source. They shouldn’t have molds growing on them. It’s possible to disinfect them before planting.

Only use the most mature compost to enrich the soil immediately around your seed holes. It’s fine if further off almost pure manure or compost is used, but in the 4 to 6 inches (10 to 15 cm) closest to your seedlings you’ll only want very ripe compost.

Otherwise, you’ll be attracting fungus with all that fresh material, and it’ll attack your seedlings in stride. Not to mention that having too many nutrients around your seedlings might burn them, too.

Sometimes, when you’re recycling old potting soil, you’ll have to sterilize it completely in an oven (two-three hours at around 400°F or 200°C).

Another technique is to pre-colonize the soil with beneficial fungus. They’ll out-compete the bad rot-inducing fungus and protect your plants. 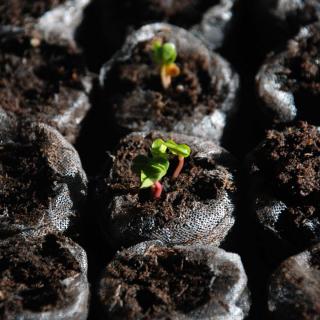 Grated black wood charcoal is excellent against fungus. It keeps the spores from germinating.

There are two ways you can use it:

Either technique is fine but there’s no need to use both.

Young plants are the most vulnerable

These fungus are particularly aggressive against fresh, young sprouts because they don’t yet have a very strong immune system. Almost all plant species in the world can be infected at that stage.

On top of that, the seedling’s structure isn’t yet very marked: root, stem, and cotyledon leaves are more or less a single extension. On the contrary, more mature seedlings have clear “barriers” between root, trunk and leaves. These serve as biological barriers and slow the spread of fungus down in older plants.

Most vulnerable vegetables and flowers

Prepare several trays when sowing seeds. It’ll avoid loosing all your seeds to damping at once!

Credits for images shared to Nature & Garden (all edits by Gaspard Lorthiois):
Coffee seedlings damping by Scot Nelson ★ under Public Domain
Sick seedling in hand by Scot Nelson ★ under Public Domain
Radish seedlings by Jordan Meeter ☆ under © CC BY 2.0
Meet the community
Need advice? Share your garden joys & woes!
Live from the forum
Frangipani seedlings have floppy leaves just sharing my new leaves in my squash patch Why are my tomato seedling leaves wavy?

Fire blight, a bacteria that flares through entire orchards in months
Fireblight is a fast-spreading bacterial disease. It's crucial to cut off and remove any infection before it spreads too far.…
Sowing indoors, the best way to start seeds inside the house
The garden season begins with indoor sowing at the end of Winter. It’s important to choose your equipment well and…
Phytophthora: one name, many diseases
Phytophthora is a word used to describe more than just a single disease. The term refers to many different plant…