Cytisus is a fantastic flowering shrub, instantly recognizable thanks to its flush of upright, blooming branches.

A summary of Cytisus facts

Easy to care for, the planting and pruning contribute towards increasing growth and blooming of your cytisus.

If purchased in a container, cytisus can equally be planted both in fall or spring, as long as it doesn’t freeze.

Note that some Cytisus species are invasive in the Americas. Here are the best alternative broom shrubs that can be planted instead.

Pruning and caring for cytisus

Cytisus is so easy to care for, that it requires very little work and you can forget about it completely. Its magnificent blooming will remind you it’s still there, though!

How to prune cytisus

Cytisus doesn’t need to be pruned or trimmed, but you can, however, remodel its shape from time to time.

Prune the sprigs of the year when the flowers have died off the cytisus.

You can also reshape your cytisus to a nice shape just after the blooming, cutting back more drastically.

As regards watering, the first year is the only year where regular watering is needed.

Indeed, cytisus is a shrub that doesn’t fear high temperatures.

A cytisus growing in a pot nonetheless needs more attention as regards watering. 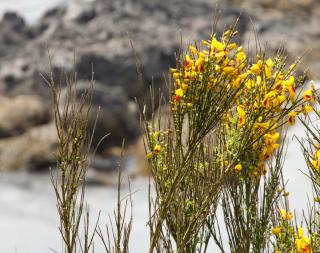 Cytisus bears flowers abundantly and it is very colorful, a real ball of golden fire for the most part of spring.

Its growth is relatively fast and it adapts well to most soil and climate types.

Cytisus only live for a few years, 5 to 7 at most, which means they require replacing after this short span of time.

You easily prepare cuttings in summer to multiply your plants, which is a great way to replace the mother plant regularly.

Even though the color and bearing is similar to those of scotch laburnum, they’re both different shrubs.

Another broom that resembles this plant very closely is French broom.

However, Cytisus, specifically the Cytisus scoparius species, is exactly the same thing as Scotch broom. Scotch broom is a species within the wider Cytisus (or broom shrub) family.

Properties and traditional use

Cytisus sprigs are used in the pharmaceutical industry. Sparteine is extracted from Scot’s broom. This compound has properties that help regulate heart activity.

The most common Cytisus varieties:

Formerly part of the Cytisus family, French broom is now classified as Genista monspessulana, but it’s definitely a wonderful broom shrub (also a bit invasive, though).

In order to protect roots from the cold in winter, go natural and mulch the foot of the tree with plant-based mulch.

Credits for images shared to Nature & Garden (all edits by Gaspard Lorthiois):
Thick cover of flowers by Axel Kristinsson under © CC BY 2.0
Rare red on C. scoparius by Roland Tanglao under © CC BY 2.0
White cytisus by Leonora Enking under © CC BY-SA 2.0
Meet the community
Need advice? Share your garden joys & woes!

French broom, a treacherous and invasive beauty
Horticulturists love its yellow blooming, but French broom (Genista monspessulana) is actually invasive in many countries. It's a dangerous fire…
Scotch broom, is it invasive or not? Depends where…
Scotch broom, although a delightful shrub, is not to be planted everywhere. This European native fought with other plants to…
Scotch laburnum, magnificent yellow bunches
Scotch laburnum is a small tree or shrub that is incredibly flower-bearing, hardy and easy to care for. Basic Scotch…