Staghorn sumac, also called vinegar sumac, is a short tree that grows in a roundish shape.

How to plant staghorn sumac 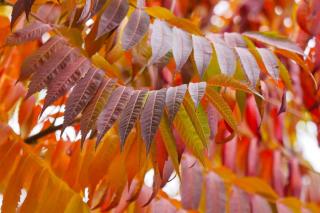 It doesn’t make any difference whether your staghorn tree is planted in spring or fall.

Propagation through root cuttings in fall, but you can also just wait for it to send shoots up from the running roots and dig those out. 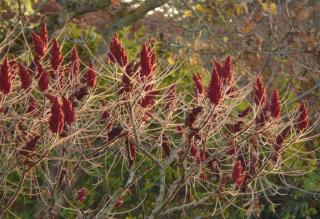 Before pruning your staghorn sumac, done gloves, because the sap is a bit sticky.

Staghorn sumac has rather brittle wood that can’t cope very well with windstorms. Don’t even think of hanging a swingset from it.

Can I cut staghorn sumac back by a lot?

Staghorn sumac will bounce back from even the hardest pruning. If you cut it down to a stump, new shoots will reappear in the following spring from the vigorous root system. It’s as strong a grower as bay in this respect.

Hatracking, or cutting back haphazardly just to shorten the tree, is strongly discouraged. Indeed, new branches would come out that are only weakly connected to the tree. Since staghorn sumac wood is brittle, these branches would easily break off if it gets windy. Dangerous if people walk nearby. Not a problem if you contain growth to less than 6-8 feet (2-2.5 meters).

That being said, it’s best to simply shorten the longest branches by cutting them back to a junction. For example, if a branch splits into two smaller branches, cut the longest of the two back to the junction. If the tree still feels too large, go for a second round. Best do this in fall, after leaves have fallen. 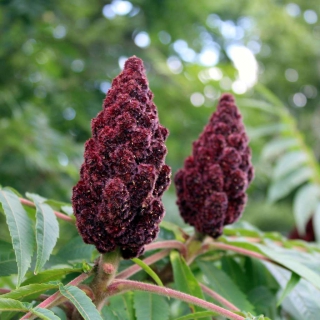 A very beautiful shrub with a spectacular summer blooming, sumac is also remarkable in fall, when its foliage rolls over to flamboyant hues before falling off.

It is definitely among the most beautiful ornamental shrubs from September to December.

This easy to care for shrub will produce the nicest impact as a standalone, because as years go by it tends to grow wide instead of tall.

Take note, though, that staghorn sumac can turn out to be rather invasive, both because its seeds sprout easily and because underground roots send up shoots.

Staghorn sumac fruits can be used to prepare lemonade, all that has to be done is to prepare a decoction from the fruits.

The tangy, acidic taste gave the tree its other common name: the vinegar tree. Its fruits contain high doses of vitamin C and tannin compounds.

While very common, staghorn sumac isn’t dangerous to most people. Other species that share common ancestors, like poison sumac (Toxicodendron vernix, formerly Rhus vernix) and the Chinese lacquer tree (Toxicodendron vernicifluum, formerly Rhus vernicifera) are very poisonous for most humans and pets. For those two, the entire plant is poisonous, as the sap is what contains the toxic compounds.

However, especially after repeated contact,  some people turn out to be vulnerable to staghorn sumac’s sap.

Too much exposure to that white, milky sap called latex might trigger an allergic reaction.

This usually isn’t anything more than dermatosis, rashes or swelling on the hands and forearms, but in some cases it may lead to severe anaphylactic shock, where the blood pressure drops to the point of losing consciousness and swelling of tissues in the throat and mouth area can lead to choking.

Read also on the topic of shrubs:

Planting this unique tree in your garden will bring lots of color to your garden!

Staghorn sumac leaves will gradually shift from spring green to carmine red, with shades of  daffodil yellow and lush orange.

Meet the community
Need advice? Share your garden joys & woes!
Live from the forum
This is a kind of sumac but which one, how can I tell them apart?

Lavender varieties that won’t bear seeds
Want to plant lavender but worried that it might turn invasive? Select a sterile lavender variety with seeds that won't…
French broom, a treacherous and invasive beauty
Horticulturists love its yellow blooming, but French broom (Genista monspessulana) is actually invasive in many countries. It's a dangerous fire…
Biological control of Russian olive
There is, as of now, no perfect solution for biological control Russian olive through predators or parasites. When a particular…