Bearing – bushy or upright, depending on the species
Height – from 8 inches to 6 feet, again depending on species
Planting density – variable (per species)

With its beautiful yellow flowers, the huge heart of which Van Gogh would have admired, each one of the Inula species is a magnificent flower bed perennial. Ease of care, choice of many sizes, shapes and leafage make it a guaranteed asset in your landscaping.

To make sure each inula plant grows well, prepare soil so that it’s full of organic humus and make sure it drains well. The goal is to retail as much moisture as possible without drowning roots in excess water. For a flamboyant blooming, best results are in full sun. Part sun is also tolerated by Inula. Planting is in fall (spring eventually), just follow these 5 steps:

Diligently do the following for healthy flowers:

The best way to get new Inula specimens is clump division. To do so, pull the plant out with a spade fork and tear the root ball apart with your hands. If it’s too difficult, a sharp spade can wedge and cut its way through. Then simply replant each half in the ground, separately.

Depending on weather, you might discover bouts of powdery mildew. If this lasts for more than a week or two, start applying a treatment.

Taller species (Inula helenium for instance) will look great as standalones. However, for most other species, Inula looks best when surrounded with other flowers such as:

Inula helenium: topping off at nearly 6 feet (2 meters), this is one of the tallest inula species. The voluminous root clump, large leaves and flowers hint to its vocation and calling: I. heleniumlarge flower beds. 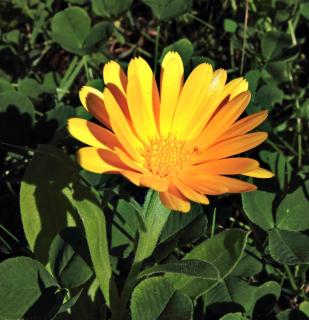 Inula ensifolia ‘Compacta’: the complete opposite of I. helenium, this is probably one of the smallest species. Never will it grow any higher than 8 inches (20 cm) and its simply perfect for small flower beds and along edges.

Inula royleana: an in-between, just the right size compared to I. helenium and I. ensifolia ‘Compacta’: it only measures about 20 inches (50 cm). Its large 5-inch golden yellow flowers will flash their joy around your summer garden.

Inula helenium or Great Inula is an edible plant, it’s even quite often used for its medicinal benefits. The roots of Inula helenium is indeed often categorized as a herb. It works for several different types of ailments, for instance against cough and various inflammations of organs involved in breathing.

The most common manner of using Inula is simply to brew an infusion. Steep the powdered roots in hot water and it will soothe sore throat and clear airways.

Using Inula helenium is not recommended for pregnant women.

Tarragon, a very fragrant plant
Tarragon is a delicious herb plant perfectly suited to our climates. Top Tarragon facts Name – Artemisia dracunculus Family – Asteraceae…
Rhodanthe, superb for dry flowers
Rhodanthe is a pretty little annual that blooms from spring and until the first frosts, offering magnificent pink inflorescences with…
Oxeye daisy, flowers galore
Daisy is the name given to a host of varieties and so they come in different shapes and colors. Key…