Physalis or Peruvian coqueret is a plant that offers cute, perfectly edible fruits.

Physalis basics in a few words

Caring for physalis is easy and the medicinal properties of its berries are famed the world over.

Physalis is planted indifferently in fall or in spring.

You can find physalis planted in shrub or flower beds, in pots and also in the vegetable patch.

If you wish to sow, we suggest covered sowing at the very beginning of spring.

It’s possible to divide the clump in spring or sow seeds at the same time (see sowing physalis above).

It is preferable to only water in case of extreme heat waves or prolonged dry spells.

Adding tomato plant fertilizer with the same doses as might be written on the packaging will enhance your physalis’ growth.

At the end of the growing season, to speed fruit ripening, it’s possible to pinch the head off stems to focus all the sap on the fruits.

Insects and diseases that infect Physalis

Although it isn’t often visited by parasites and diseases, physalis might occasionally show signs of:

Physalis also serves as a host for Septoria, even though the plant itself isn’t often infected by it. This  can then hop over to tomatoes, potatoes and eggplant to infect them.

Physalis can be harvested as early as July for the earlier cultivars in the warmest regions, and from September to October elsewhere and for later varieties.

The harvest can indeed last until October and even November in regions where the climate isn’t as favorable. Physalis plants won’t survive the first frost spells.

Whether the variety is a red, orange yellow or green-hulled variety, you can be sure they’re ripe when the hull turns purple and then brown. It will start to open up when the fruits are ready for harvest. 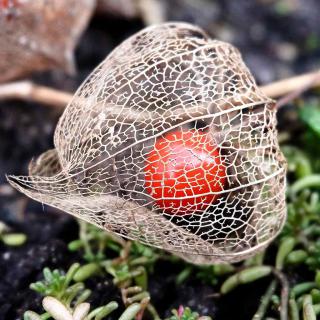 The name comes from the Greek root word physalis which means bladder, due to the resemblance of the calyx to that organ.

It has been given an incredible number of names depending on the region and the variety, such as winter cherry, Cape gooseberry, Peruvian coqueret, Chinese lantern or even the romantic name amour-en-cage (“caged love”).

Physalis contains high levels of vitamins A, B and especially C, it is also a surprisingly rich source of beta-carotene when fully ripe.

Note that the therapeutic benefits of physalis include treatment of urinary tract infections and rheumatism.

Note that the most used common names for physalis are ground cherry, Chinese lantern and Japanese lantern (hōzuki in Japanese).

Sometimes, when sold without the hull, Physalis is confused with cherry tomato.

Fertilizer will help if your soil is poor and you wish to maximize the harvest.

Looking for advice? An idea to share? Interesting topic?
Live from the forum
Physalis

Brugmansia, gigantic flowers!
Brugmansia, also called “Angel’s Trumpets” for the magnificent flowers shaped like trumpets, is a very interesting and ornamental shrub. Basic…
Surfinia, the hanging petunia
Surfinia is actually a kind of hanging petunia that bears hundreds of small bell-shaped flowers. It is often used as…
Cherry tomato, savoring the summer!
Cherry tomato is easy to grow and the harvest is often abundant.   Key cherry tomato facts Name – Lycopersicon…