Home » Gardening » Trees and shrubs » Ilex vomitoria, a landscaping shrub that doubles as a tea provider

Ilex vomitoria is a herbal shrub that boasts fascinating properties when drunk as tea.

Ilex vomitoria, also called yaupon, is quite the stunner in the garden in winter thanks to its lush evergreen leaves and bright red berries!

Ilex vomitoria is a shrub that responds well to transplanting.

You can also simply dig an offshoot up from a willing neighbor’s garden. Ilex vomitoria won’t give you any hassle and will take off without the slightest hint of transplant shock.

How to water Ilex vomitoria

There is no need to provide fertilizer for your Ilex vomitoria to grow.

Like other Ilex species, “slow and steady” is what best describes the growth pattern of Ilex vomitoria. Larger yaupon grow faster than dwarf yaupon hollies.

How to help a straggly overgrown Ilex vomitoria to recover

Severe pruning is possible. In spring:

Your Ilex vomitoria will look a bit scrawny and leafless, but very quickly it will start growing many new twigs and leaves. Within two to four years it will start showing its nice, distinctive shape again.

The name of this type of pruning is called “hat racking“. It should only be used on a few select species, and then again only as a last resort.

It’s extremely rare to see an Ilex vomitoria succumb to diseases or pests.

When well settled in, Ilex vomitoria will resist both drought and occasionally drenched soils.

Note, though, that if planted in part shade, your Ilex vomitoria might be more vulnerable to root rot in wet soils. This would translate into dropping leaves and, in extreme cases, entire sections of the shrub would die off.

These grow slowly, and remain small if pruned often.

These grow taller and can be used for hedges.

The following have a distinctive shape and are best planted on their own, or in a dedicated shrub bed: 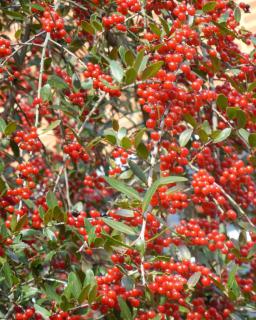 The latin name of the plant is misleading: “vomitoria” means “vomit-inducing”. In reality, Ilex vomitoria doesn’t do much as regards vomiting or digestion, except if you drink large quantities of tea extract. This explains the “light toxicity” warning sometimes attributed to Ilex vomitoria.

Note: don’t eat or use the berries – Ilex vomitoria leaves are what you want to make yaupon tea from!

However, this Ilex vomitoria herbal tea is very potent as a stimulating drink because it contains caffeine in noteworthy amounts. The common name for the plant, “Yaupon”, derives from Native Americans. They used the plant to brew herbal tea which they drank before going into battle. The caffeine drink would excite their senses and make them feel nearly invincible!

“Ilex”, the genus name, was chosen because the small, serrated (toothed) leaves were very similar in size and shape to those of evergreen oak, Quercus ilex – and they are both evergreens.

Ilex vomitoria leaves contain caffeine in high amounts, but in a particular form that energizes without giving the jitters. Roast a few handfuls in an oven and brew like coffee! Double check that you’ve got the right variety, though, because not all types of holly have edible leaves.

Credits for images shared to Nature & Garden (all edits by Gaspard Lorthiois):
Ilex vomitoria branch by Madison Wooley under Pexels license
Dense berries on Ilex vomitoria by an anonymous photographer under pxhere licence

Amaryllis, a dazzling flower
Amaryllis is a bulbous plant that is truly magnificent when it blooms in fall, or winter indoors. Summary of Amaryllis…
The complete guide to spending December in the garden
Here it is! Winter frost is back and sometimes even snow which lead us all up to Christmas! Although December…
Christmas and New year, 3 easy floral arrangement ideas
Preparing a beautiful table with flower arrangements when receiving guests for feasts like Christmas and New Year is quite a…