The geranium ‘Rozanne’ is a variety that has the advantage of being a perennial. It thus resists freezing while maintaining incredible ornamental value.

Soil – ordinary but well drained
Flowering – May to October

Preferably in fall or spring in a mix that includes geranium-specific soil mix.

Since Geranium Rozanne is a sterile hybrid, it will never produce seeds.

Pruning and caring for the geranium Rozanne 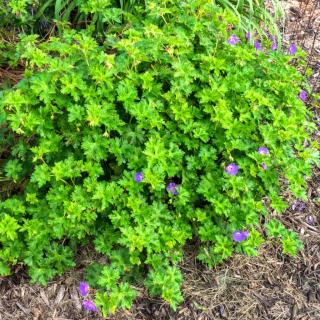 The geranium Rozanne requires next to no care.

Cut back stems eventually after they have flowered in order to trigger production of new flowers and avoid draining your perennial geranium.

As resistant to diseases as it is hardy, no known disease seems to infect geranium Rozanne.

Leaves and smaller stems will die back with the cold.

For sustained blooming, water often but make sure excess water drains out.

Learn more about the geranium Rozanne

This perennial is among the most abundant flower-bearing geraniums. More than anything, it is among those that bloom over the longest period. Indeed, the blooming extends from May up to the first fall frost spells. It can withstand summer heat.

Care, heat resistance and water needs are identical to those of Sunpatiens, another great sun-loving flower.

In a flower bed and also along edges and in rocky ground, geranium Rozanne can serve as excellent ground cover and beautiful garden box items.

Geranium Rozanne was first bred and discovered in 1989, by Donald and Rozanne Waterer. They were growing several dozens of Geranium plants which Rozanne loved. One year, a particularly vigorous specimen appeared in their garden in Somerset in the United Kingdom. It flowered profusely the next year from spring to first frost. Rozanne had never seen such a bloom! Parent plants were Geranium himalayense and Geranium wallichianum.

The couple was already familiar with horticulture, since Donald had been born and raised in a family that loved gardening (they had bred many hardy azalea varieties in their heyday). He had managed it and this discovery came after he had retired. They got in touch with flower expert Graham Stuart Thomas.

Graham Thomas was already famed for his work on preserving old English roses heritage breeds. He guided the Waterers towards Adrian Bloom (of Blooms of Bressingham), a well-known horticulturist. After propagating, growing and testing the plant, they were able to patent it as a new development!

Thus the plant was originally protected by a plant patent. The botanical name is actually “Gerwat”, which stands for Geranium and Waterer. “Rozanne” is the trademark name that the plant was marketed under, in honor of Mrs. Waterer.

After 2 decades, this patent has expired in February 2019 (for the United States and GATT signatory countries). It’s now allowed to propagate your own, and even sell them!

It’s a beautiful example of how a passion for flowers can spread the world, since millions of specimens have been sold throughout the world.

You can provide it with geranium-specific organic liquid fertilizer once or twice in the season to increase blooming.

Also, Geranium Rozanne prefers slightly acidic soil rather than alkaline soil, so a good mulch to use is pine bark mulch or even coffee grounds.

Geranium, how to care for it
Geranium is an enchantment in the garden and on the deck all summer long. Main Geranium facts Name – Geranium…
Geranium cuttings, easy to prepare
Cuttings is surely one of the easiest techniques to perform and it allows for propagation of geraniums in an affordable…
Perennial geranium, beautiful and easy to care for
Perennial geranium is a variety that has the advantage of being hardy and thus resists freezing. General Perennial Geranium facts…