They’re crisp and tasty and some may even bring you to tears when cooking… All for good reason! Nutrients and compounds found in plants of the Allium family are correlated with clear anti-cancer activity.

Together with treatments prescribed and follow-up by licensed doctors, they will help you in the quest to prevent or fend off cancer.

Members of the Allium family have developed strong, volatile compounds as a way to repel pests both large and small.

The strong smell that is released whenever a leaf is crushed or a bulb wounded is a combination of compounds that become airborne when individual cells are destroyed.

These are enzymes called alliin lyase (or alliinase) and LF-synthase, released together with organosulfides. In intact cells, they’re stored separately, but when sent out into the air, they react and produce sulfenic acid. This particular type of sulfuric acid wafts up to the eyes and nose and triggers painful, tear-bringing messages in the body.

It is a particularly effective way to repel large herbivores and omnivores and also small insects like aphids and such. Plants of this class also show bactericidal, antiviral and fungicidal activity, thus impacting even the microscopic world.

Flavonoids are a sub-class of phenols. The specific type of flavonoid in plants of the Allium family is called a flavenol.

Two of the most present flavenol compounds in the allium family are quercetin and kaempferol.

Quercetin and kaempferol are pigments, which means they impart color to the plant parts they’re in: yellow and red. 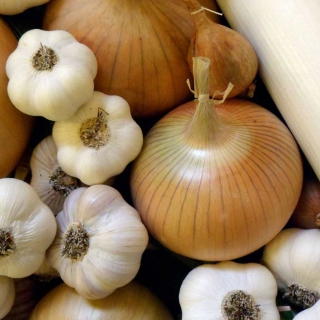 Collectively, organosulfides and phenols influence cancer in various ways and ingesting food items that contain them will lead you to benefit from some of their capabilities.

How do these compounds affect cancer in the body? Let’s take a look at how these compounds impact the development of a cancer, from the prevention stage all the way to the influence on an active declared cancer.

Flavonols and organosulfides from onions, garlic, leek, chives and shallots (or scallions) may help:

Most of these were observed and documented in vitro against individual cells in a laboratory. Real-life in vivo situations differ from controlled-environment protocols, so a lot of research is still needed to definitively prove this activity. 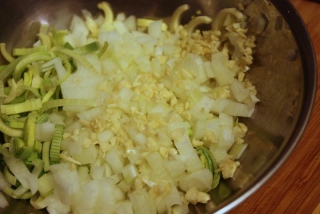 Eating these raw is best, but it’s also the most difficult given their strong taste and low digestibility for weak stomachs.

Cooked Alliums, whether steamed, fried, boiled, baked or else still retain some effectiveness, since quercetin, kaempferol and organosulfides are heat-resistant. However, the “cocktail” effect isn’t as powerful since many other compounds are destroyed by heat (vitamin C, for instance).

Incidentally, different portions of allium bulbs have been analyzed: the darker outwards layers, the center-most part, and the lower part closest to the roots are where these compounds are most concentrated. Try to slice as close to the roots as you can!

It has been documented that, for alliums, active ingredients vary in proportion and amount for each variety, even within a single species. As a general rule of thumb, the more colorful the bulb or leaf, the more active ingredients it contains. After all, the flavonols here are also pigments used as dyes in some countries.

But don’t focus all your attention to a single variety, even if its the darkest and most colorful: in some cases the ratios of active compounds will protect more against one type of cancer than the other. So you’ll want to vary varieties, too – pun intended! 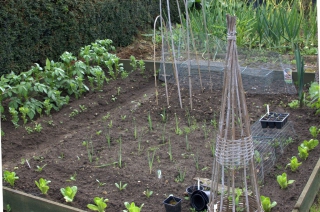 Apart from the therapeutic effect of growing a garden, having your own onion and garlic patch will ensure you have access to healthy, fresh, organic food.

Plants of the Allium family are very easy to grow:

Smart tip on which onions are healthiest

The darker the color of the onion, the more flavenols it usually contains.

Smart tip about alliums and cancer

Remember to talk to your doctor before making any drastic changes to your diet if you’re undergoing therapy. It’s important because the potent compounds of alliums, in rare cases, may interfere with medicines you might be taking.

Lots of leek grown easily
Leek is a vegetable that grows well in cooler climates and sowing and transplanting it at just the right time…
Garlic decoction, technique and timing
Garlic decoctions are an excellent solution to treat most diseases and fungus that impact plants, fruit trees and vegetables in…
Allium, exceptional bulbs
Allium is a superb flower, famous for its surprising ornamental floral scapes. Key Allium flower facts Name – Allium giganteum…