Jerusalem artichoke or Helianthus tuberosus belongs to the same family as endive, lettuce and sunflower: the Asteraceae family.

There are several Jerusalem artichoke varieties. Depending on the variety, the color of the root changes. It can be white or yellow, or even pink and purple, like the ‘Rouge du Limousin’ or the ‘Violet de Rennes’.

This root-vegetable can be eaten from November to April. In Europe, Jerusalem artichoke production is mainly grown in France, Germany and the Netherlands.

It’s also called the “winter artichoke”, “earth pear”, “sunchoke” and also “Canadian truffle”. Discover this delicious root vegetable which is such a boon to our body’s health.

In French, the vegetable is called “topinambour”, which, curiously, is named after a Brazilian tribe called the “Tupinambas”.

The explorer Samuel de Champlain brought the plant over from Canada in the XVIIth century.

During the Second World War, Jerusalem artichoke was a staple food that replaced potatoes which were requisitioned by the German occupants.

After the war, people spurned these spuds and didn’t want to eat of them anymore because they were connected to a time of dire need and rationing.

Today, this vegetable is making a comeback in our diets, which our tastebuds can only be grateful for.

Moreover, the very high amounts of inulin, which is a polysaccharide often present in plants. This compound eliminates noxious bacteria that sometimes live in the colon. Actually, it protects the good bacteria that are part of our intestinal flora and are beneficial when defending the body.

Jerusalem artichoke contributes to weight loss thanks to this inulin. Jerusalem artichoke is an excellent appetite suppressant. It quickly leads the stomach to signal that it’s full, and thus whisks away the desire to overeat or snack.

It reduces bad cholesterol levels and supports good cholesterol. Thus, it preserves our arteries and limits appearance of cardiovascular diseases.

Jerusalem artichoke is an excellent disinfectant.

It also carries iron which is excellent to promote the flow of oxygen in the blood and inside body cells. It helps fight against anemia.

The vitamin C that appears in Jerusalem artichoke is a powerful antioxidant that protects our bodies from free radicals, from cellular ageing since it stimulates the immune system.

It’s recommended for nursing mothers since it speeds milk production.

Precautions: Jerusalem artichoke might cause flatulence and stomach trouble. Some persons aren’t able to digest it well.

Jerusalem artichoke in the kitchen 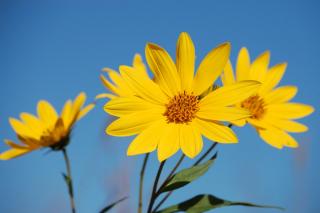 The taste is quite similar to that of artichoke, which is why the name “artichoke” stuck to the plant.

It can be eaten both raw and cooked.
Savory ways that the Jerusalem artichoke is often prepared is steamed, pureed, baked with cauliflower, added to ratatouille or to an omelet.

Soups and cream soups are also a delicious way to eat it.

Some people grate it and season it for starters.
Baked in the oven with a smidgen of olive oil and a pinch of spices makes a great side dish.

The flowers are edible and can be added to mixed salads.

It imparts 4 times less calories than potatoes. This is the perfect vegetable for your weight-loss diet.

Since its glycemic index is so low (15), Jerusalem artichoke can be included directly to the diets of diabetic persons. Indeed, it won’t lead to that disruptive glycemia spike (glucose levels in the blood). 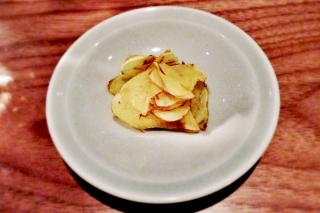 Sauteed in a pan, Jerusalem artichoke will side well with meat.

How to keep Jerusalem artichoke

This fragile vegetable only keeps for a few days in the vegetable rack in your refrigerator.

Credits for images shared to Nature & Garden (all edits by Gaspard Lorthiois):
Jerusalem artichoke tubers in a bowl by Silvia under Pixabay license
Sunchoke flower by Friends of the Prairie Learning Center at the Neal Smith National Wildlife Refuge under © CC BY 2.0
Sliced and pickled by T.Tseng under © CC BY 2.0
Meet the community
Need advice? Share your garden joys & woes!