Labrador tea is a sub-shrub that grows in the coldest parts of North America, and caterpillars from such butterflies known as “Northern blues” or “Brown elfins” survive thanks to its nourishing leaves. It grows on bare rocks and in acidic soil deep in coniferous forests, in heath and heather, swamps and tundra.

Grown from Greenland to Alaska, this plant is virtually unknown today in Europe.

It grows leathery green and thin leaves, with edges that tend to curl up. Leaves and stems are covered with a dense cottony fleece.

A fragrant plant much appreciated by American Indians, it quickly spread across New-France through the first settlers that drank it as tea.

Both during the War of Independence (1775-1780) and the 1930’s economic crisis, Labrador tea quickly replaced imported China tea.

After this foreword, we will now delve into the benefits of this sub-shrub which has many names that we’ll discover throughout the page.

What are its health benefits? What ailments does it soothe (or cure)? How should it be used? Let’s have a look around… 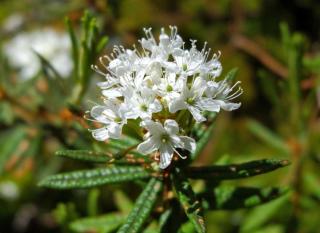 Just like rhododendrons, bearberry, azaleas, huckleberry and cornflowers, Labrador tea is a plant that belongs to the Ericaceae family.

Labrador tea can grow to reach 5 feet (1.5 meters) wide and high, and grows into a bush. Ancestors of the Apaches and Navajos (American Indian nations) used to drink it as tea.

Its leaves are green on the topside and orange on the underside. They keep for quite a long time after harvest.

Also called “Eskimo tea” or “Greenland Ledum”, this plant with multiple benefits is also a source of food for wild water fowl (geese, ducks, swans, storks…) that love its berries.

Leaves are the part of the plant that is consumed. They can be harvested all year round, but spring is favored.

Indeed, some populations particularly like its taste when eating Labrador tea leaves raw. These are chewed upon, or used as spice to flavor meat. Others even add the branches to the preparation used to macerate leaves, and used this maceration to dip or boil meat in. 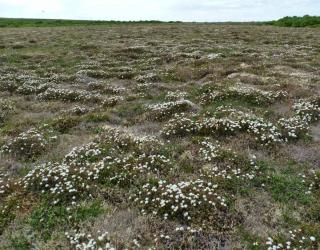 With such properties, Labrador tea is recommended to treat headaches and migraines, dysentery, bladder disorders and pertussis.

To this can be added other ailments and disorders such as thyroid imbalance, solar plexus spasms, restlessness, insomnia, pulmonary inflammation, and flu-related sore throat that have also been treated thanks to Labrador tea infusions.

For some American Indian nations, pregnant women used Labrador tea 3 times a day for a few days before giving birth to stimulate labor.

In Russia, researchers have proven that this medicinal herb contains a substance similar to urethane: it thus would have antimutagenic (used to treat certain forms of radiation exposure) and antioxidant properties. Labrador tea essential oil helped heal patients suffering from taiga spring summer encephalitis (an infection born by mosquitoes and ticks).

It seems that American Indians added Labrador tea leaves to their pipe mix and smoked it.

Labrador tea is also used to repel mites (devastating insects) that feed on clothing fibers and prepare their cocoons from them.

To use them, take dried, crushed Labrador tea leaves. Place them in a pouch and place the pouch in your closet or wardrobe.

External use of Greenland ledum has been reported to have antiparasitic effects, to treat certain skin conditions (leprosy, ringworm, scabies) and even to fight lice.

> Various galenic forms and doses for use

As a drink, Labrador tea can be ingested:

After a few minutes, pour this preparation in a pitcher with ice cubes. When drinking your lemonade, you may add cold water if it is too strong.

For this, prepare tea concentrate with 1 table spoon of dried crushed leaves steeped in ½ cup boiling water. Let steep until cool. Pour decoction on a compress and apply to neck and forehead.

When preparing herbal tea, don’t let steep for too long because this releases agents that are difficult to digest.

If excessive doses of Labrador tea are ingested, this may lead to spasms, irritation of the digestive tract and nervous disorders.

It is best to avoid drinking large quantities of herbal tea: one mug a day is enough.

Note that drinking Labrador herbal tea is strictly forbidden to pregnant women. Not enough studies exist that prove that labrador tea is harmless to children whose mothers might have drunk substantial amounts of it. As mentioned above, pregnant American Indian women would ingest a bit for a few days just before childbirth, when the baby is fully formed, but not as a regular course during pregnancy.

Whatever the situation, you must always follow the guidelines and instructions on using and consuming Labrador tea to avoid negative or undesirable results. You may also ask your consulting physician or a herbalist for advice.