Home » Gardening » Trees and shrubs » Trees with gold yellow leaves, bring the sun to the garden!

Fall is the season of nature’s grand finale, an explosion of color before a well-deserved rest. Like a show of fireworks, a culmination of powerful fiery bursts of color bursts forth from trees left and right in the scenery and in the garden. Gold in particular flashes and shines in all its rich tan-to-orange leaves, a compelling yellow landscape that pairs well with the soft, dull light of the season.

Set your own garden up for these bursts of color in autumn, before deciduous trees bare their slender frame. 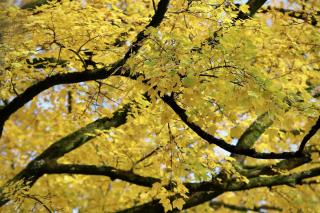 Many different types of ornamental maple display brown, orange and red hues in fall – and they all go through bright yellow beforehand. Savor this golden mantle for long weeks with the common maple species that grow naturally in our areas, such as Norway maple (Acer platanoides) which has leaves nearly identical to those of the plane tree. Its leaves typically take on a bright yellow color in fall, except for purple-leaved cultivars.

The sycamore maple (Acer pseudoplatanus) structures its leaves in a nice way, with gold yellow leaf lobes carried on a stark red petiole.

The smaller-sized 12 to 20 feet (4 to 9 meters) field maple (Acer campestre) is the last to shift its palette to gold in fall, an excellent addition to a freestyle hedge. Sometimes, though, leaves turn red instead of gold yellow.

Cappadocian maple (Acer cappadocicum), for its part, usually paints the scenery with various shades of tan. This small maple of Asian lineage has golden star-shaped leaves in fall, but one cultivar has bright yellow young leaves in spring as well: ‘Aureum’. It follows a regular, symmetrical growing habit, doesn’t take up much space, and is too often overlooked when choosing trees to line roads and paths. It’s a fabulous collector’s specimen for a garden. Cultivars quickly grow 30 to 45 feet tall (10 to 15 m) for about 15 to 18 feet across (5 to 7 m). In the wild, though, native specimens reach up to 75 feet tall (25 meters). 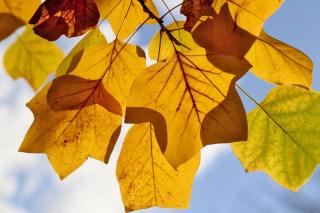 The tulip tree (Liriodendron tulipifera) originates from forest colonies at the foot of the Appalachian mountain range. It has long been considered a first-grade ornamental tree. With a graceful silhouette (100 feet/35 m tall for cultivated specimens), an exceptional lifespan (4 to 5 centuries), and a lineage that reaches back to the first stages of plant evolution, it clearly deserves a spot of honor in the garden.

Leaves are unlike any other in the plant world. Rich, gold yellow color covers the tree in autumn, and a simple gust of wind sends them fluttering around. After a decade or so, orange tulip-shaped flowers appear in June. This tree appreciates deep, cool and fertile ground. Note that it should drain very well in winter. Better too, if the soil is slightly acidic. It likes light and part shade, but too much direct sun might burn leaves in dry weather.

Remember to plant it away from walkways and electric wires because the wood is brittle and breaks off as it ages. This tree doesn’t react well to pruning, so only plant it in a spot that can let it grow unfettered. 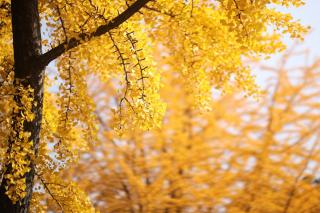 With such a name, of course Ginkgo biloba is a reference when it comes to blond-colored leaves! Another name for it in Europe is poetic in a different manner: it’s called the “40 gold-coin tree”. Though it can also refer to the color of its leaves in fall, this actually comes from the amount paid for by the Montpellier University of Medicine botanist Bressini when he bought the cutting from the English.

Sole survivor of a family that disappeared from Earth 100 million years ago, this tree is one of the oldest known living fossils. It doesn’t exist anymore in the wild, and probably owes its survival to a tradition of planting it in Chinese temples. Its fan-shaped leaves are unique in today’s plant kingdom. They hang like gold coins from branches in fall.

Good to know: this is a dioecious species, meaning some trees are male and others are female. Female trees aren’t much liked because they produce foul-smelling fruits that turn the ground slippery underfoot. They start bearing fruit at around age 20. An interesting pyramid-shaped cultivar grows much smaller than the natural species. Topping off at about 30 feet tall and about 6-8 feet across (10 m tall and 2 m wide), Ginkgo biloba ‘Blagon’ suits smaller gardens perfectly. It’s a male clone – no smelly fruit – that’s well-suited to lining alleyways and even large containers. 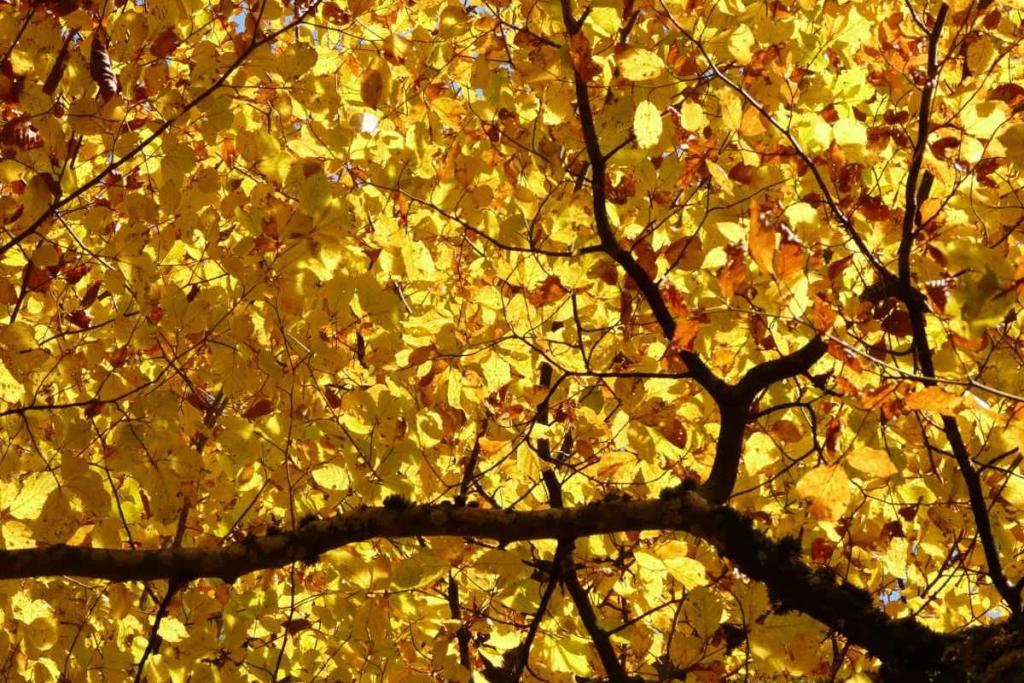 9 orange-flowered plants for the garden
Orange flowers really make a garden feel peppy and active! Perennials, shrubs, bulb and annual flowers flash their orange hues…
White garden, white flower… grow a pristine white landscape!
No need to worry about whether colors match and pair well. Perfect harmony is so hard to master! A clean,…
How to create a colorful garden
How to add color to your garden? Combine plants, garden furniture and mark out selected portions of the garden for…