Wow, imagine getting that ocean-blue Caribbean feel right in your own back yard! There are a lot of silver-blue shrubs, each more outstanding than the next, bearing flowers in different seasons of the year. Their small blue flowers vary in intensity, giving your landscaping a natural feel that pairs just as well with perennial beds as it does with shrubs. These do great in dry gardens!

Lavender pairs well with everything, as long as it grows in full sun with very well-draining soil. It’ll be perfectly happy in poor soil, even it’s little more than a heap of gravel (even limestone!). What does it not like? Heavy, soggy soil.

The blooming begins in May and can keep on going until September-October if you combine different varieties. Lavender flowers arch up, higher than the rounded mound of the shrub itself. The fabulous, heady scent it releases attracts a great many pollinating insects, from bees to butterflies.
Medicinal lavender, Lavandula angustifolia, gave rise to lavandin from which essential oil is extracted. Many ornamental cultivars also arose from this English lavender:

Plants to pair with lavender

Lavender pairs very well with grasses, perennials, lily bulbs and ancient rose varieties. The pale blue colors of its flowers usually responds well to bright colors, yellow in particular. The silver-gray leaves stay as remarkable as ever in winter, especially with a few Phormium or grasses interspersed among the clumps. When aligned along a hillside, the illusion of vast fields of lavender also creates a magnificent landscape.

The elegant Perovskia atriplicifolia bears a cloud of purple flower scapes, fine and ethereal, from July to September. These tower at nearly 4 feet tall (1.20 m). Narrow, silver-green leaves are 2 – 3 inches long (5-8 cm). They release a delicious sage-like fragrance, but they aren’t edible. Young stems are covered with white fuzz which disappears as they age.

Cut the clump back to 8 inches (20 cm) from the ground in spring. Make the most of the end of summer: collect and prepare cuttings that you winterize under a cold frame. Young plants are rather vulnerable to the cold, so it’s recommended to plant in spring. Select a location that’s in full sun and that doesn’t get too wet in winter.

What to pair Russian sage with? 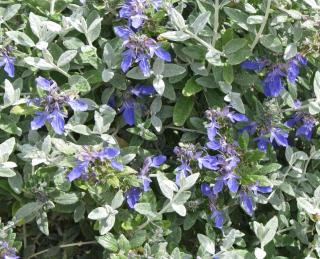 The elegant Teucrium fruticans is a typically Mediterranean shrub with evergreen, fuzz-covered fragrant leaves that are a beautiful silvery-gray color. Its advantage is that it bears a profusion of small, lavender-blue flowers as early as January. The blooming just keeps on coming all the way to June, and even gives a last burst in Fall. Flowers are similar to those of sage, with a slightly oversized underlip. They’re set up in long panicles that you can cut back after they’ve wilted: this triggers new growth.

How to landscape with tree germander?

Teucrium is typically grown in 3-4 foot hedges (1 or 1.5m), but it also works well for topiary. The repeated pruning of its branches together with the delicate, fine texture of its foliage means it fills into lush, dense growth that is easily shaped. It also deserves a spot in coastal gardens. Cut it back short after it blooms.

12 luminous white flowers for the garden
Be they simple or sophisticated, white flowers are great all-purpose plants in the garden. They pair well with all other…
Plumbago varieties, colors and climbers galore!
Several outstanding cultivars are available in garden stores. Here are a few special Plumbago varieties. Plumbago auriculata is the type…
White flower beds, which white flowers for a pearly-white garden
No need to worry about whether colors match and pair well. Perfect harmony is so hard to master! A clean,…