Home » Gardening » Treating diseases and pests » Bird vs. Bush – can there be too many birds?

Silverberry is a resilient shrub, but in this case tiny bird droppings nearly killed it… Numbers is the operative word here: when an entire flock sets down on a shrub or tree too often, it suffers dearly. Droppings and constant bird traffic can kill a tree!

Keith Hall, a Nature & Garden contributor, shares a rare experience with us.

Silverberry, not your usual grunt of a shrub

Silverberry, a member of the Elaeagnus family, stands out against most other shrub types. Indeed, it’s very hardy, resilient and weather-worthy. Its relative, Russian olive, is even invasive because it’s so hard to kill off.

But here, a healthy, well-settled in bush was teetering on the brink of survival by a simple flock of sparrows. 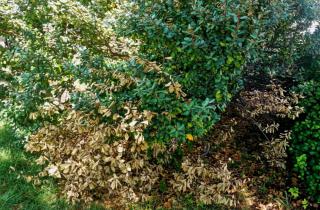 For some reason, a well established silverberry bush started dropping new growth and the once solid bush saw entire branches turn dry and die. Yard-long branches of old growth yellowed and browned into a crisp, crackly mess while other branches seemed unscathed.

Might a fungus or disease be attacking the silverberry?

Disease always starts somewhere, but other silverberry bushes in the near vicinity didn’t show the slightest hint of damage.

What about competition for water?

Silverberry is a type of bush that normally out-competes neighbors for water and nutrients. It is quite drought-resistant.

This particular bush, though, had two hawthorn bushes and two other trees within a ten yard (ten meter) radius. Together with a two-month heat wave, these plants certainly exerted competition for water, resulting in possible water stress for the silverberry.

However, Keith, with quite a bit of foresight, watered the bush abundantly, which probably saved the bush in the end.

Clues leading to the culprits

Two clues sent the investigation off in an entirely different direction:

Massive amounts of birds on bush

Over a hundred birds seemed to fly in and out of the bush on a daily basis. They were flying to and from the silverberry shrub on the way to a loaded bird feeder that was a couple yards out. This shrub just happened to be the nearest spot for cover when approaching the feeder from further out. 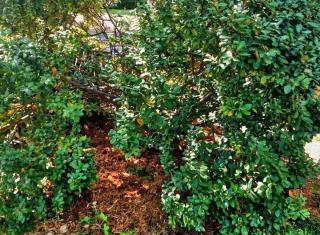 The sparrows, while they didn’t roost in the bush overnight, certainly spent a large part of the day there, zooming in and out of the shrub to the point of carving out a tunnel in the previously solid leaf cover. Branches at entry points to and from the shrub grew stunted leaf buds or died off under the constant wing pressure.

At the foot of the shrub and along the branches, uncountable droppings showed that these birds were definitely enjoying their free lunches.

Do birds ever kill trees?

Usually, birds never single-handedly kill trees. As with all things natural, a combination of factors reach a tipping point over time.

In this case, the following weakened the shrub in the first phase:

And the crucial blow was the flock of sparrows.

Accumulated droppings from hundreds of birds cause extreme concentrations of nitrogen in soil. Since a heat wave and drought were at their peak, any amount of water was loaded with concentrated nitrogen ions. This triggers imbalances in the root and sap system. Some roots send sap up to specific branches, and those branches die off wherever excess nitrogen upsets their balance.

Watering abundantly washed most droppings out, which probably saved the bush.

All in all, too much “fertilizer” burned roots off the mature silverberry, as happens to seedlings when planting in soil that is too rich. This also happens wherever chickens are permanently penned in a coop under trees.

Stopping the culprit, rehabilitation and recovery

Knowing the problem is half the solution. Steps were taken to deal with the birds and help the bush recover.

How to drive birds away

Removing or emptying the feeder is the most effective, followed by the net and fishing line. Birds don’t like getting entangled in such near-invisible obstacles.

The long-term solution is to plant berry trees and shrubs in separate areas of the garden. This adds sources of food over time as seasons come and go. Birds change flight patterns and don’t shed droppings in a single spot.

How to help the shrub recover

Pruning keeps roots from sucking up too much water from areas with too much nitrogen, and clears space for new growth.

Watering washes out excess nitrogen. This is one way to save a tree from poisoning.

Mulching with wood chips serves a double purpose. First of all, fungus that decompose wood chips consume a lot of nitrogen, so they absorb nitrogen. Second, mulch releases nutrients that help shrubs bounce back.

In the end, since the issue was solved early, the bush grew back to its full shape by the following spring. Case closed! 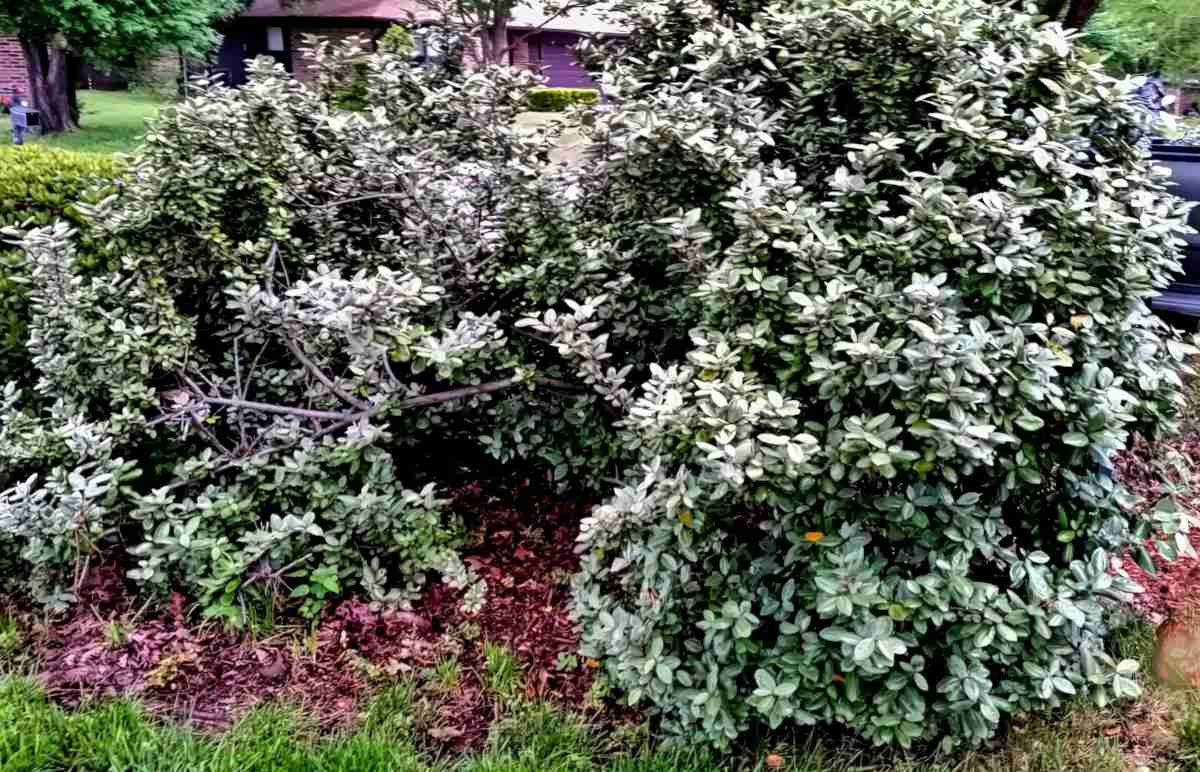 5 shrubs that birds find inviting in the garden
Here are 5 ideas of shrubs that birds love using for shelter. Each one is a dream come true for…
Septoria host plants – targets of this ravaging leaf spot disease
Septoria has often caused many a gardener to wail in desperation. What plants does it affect? Which host is it…
Growing an evergreen hedge
Choosing evergreen shrubs to grow as a hedge is often a great solution to cut off curious onlookers or simply…