Home » Gardening » The Vegetable Patch » Pumpkin, how to grow pumpkins

Pumpkin is a typical fall vegetable, which especially became famous when Halloween made it into a symbol.

From sowing to harvest, each step is important and will help you to get nice pumpkins. 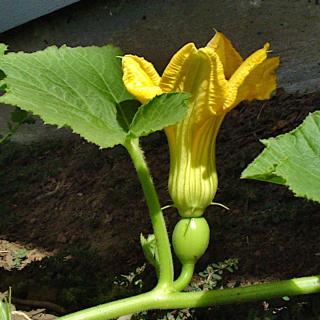 March is the right time to start sowing in a sheltered place followed by transplanting in May, or you can also go for direct sowing starting from the month of May.

When transplanting the seedlings or sowing the seeds directly, provide for 3 feet (1 meter) growing space on all sides to give the pumpkins enough room.

Pruning and caring for pumpkins

You can pinch off stems after the 3rd or 4th leaf to stimulate plant growth.

To avoid keeping the pumpkins in close contact with the soil which could lead it to rot, it is better to add a layer of mulch or plastic between the fruit and the ground.

Harvest, when are pumpkins ripe?

Harvest the pumpkins as soon as leaves dry up.

Most important is to harvest them before the first frost.

Generally, around 60 days are needed for flowers to appear, and then a further 80 days for the pumpkin itself to grow.

Pumpkins are harvested in fall and keep for several months when protected from moisture in a rather cool spot.

All there is to know about pumpkins

Native to North America, pumpkins are part of the same family as gourds or red kuri squash and come in a wide choice of shapes, colors and sizes.

Misleadingly, you might hear the word “pumpkin” when talking about other squash that look similar to true pumpkins.

Pumpkins are round and bright orange and their flesh is quite fibrous. Squash is flatter and colors range from orange to green.

Pumpkins normally weigh in at around 10 pounds (5 kg), but some specimens have been weighed at over several hundred pounds. The largest one in the world weighed in at 2632 lbs (1190 kg), in 2016 in Belgium, breaking the world record!

Take care not to let too many fruits develop on a single plant (at most 5 or 6), or you might reduce the quality of the entire harvest overall.

Growing butternut gourd
Butternut gourd, also called simply butternut, is one of the most popular squash varieties. Basic Butternut facts Name – Cucurbita…
Spring sowing and planting
There it is! Spring! Rather than cramming to fit everything in a single month, stage your sowing and planting wisely…
Red kuri squash, how to grow it from seed to harvest
Red kuri squash, also called Orange Hokkaido squash or Japanese squash, is a delicious vegetable, fleshy and tasty. Summary of Red…