Hollyhock is a true summer marvel with its magnificent flowers.

Sowing and caring for hollyhocks is easy, and they have the great advantage of reseeding themselves every year without needing help!

Planting and sowing of hollyhock

It is recommended to sow hollyhocks in spring and summer in a mix of garden soil and soil mix.

You can multiply your hollyhocks by direct sowing.

How to recover hollyhock seeds

To propagate your hollyhocks, harvest the seeds that are found in the capsules formed after blooming, store them in the dark over winter, and plant them in the ground in March or April depending on the climate zone.

If you have purchased your hollyhocks in nursery pots, it is possible to plant them in the ground directly.

Pruning and caring for hollyhock 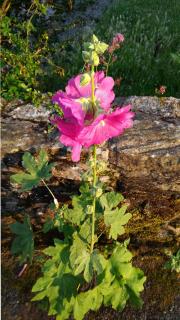 Hollyhocks, once settled in, require almost no care at all. They draw the water they need from the ground, and can cope with very harsh conditions.

Note that for windy areas, it is a good idea to stake your hollyhocks to keep them from bending over.

Diseases and parasites that attack hollyhock

This plant is vulnerable to rust, a fungus that covers the leaves with rust-orange colored blotches.

In the insect parasite category, hollyhocks are vulnerable to aphid attacks.

All there is to know about hollyhock

Very beautiful perennials with abundant flowering all summer long, hollyhocks are a great addition to flower beds and along garden walls. 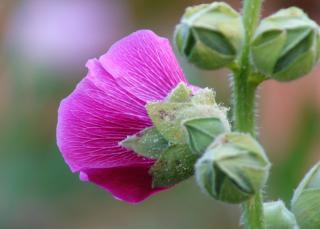 This plant has cute flowers that can be white, pink or even a purple so dark it’s almost black, aligned at the end of long stems with sparse foliage.

They are often seen along roads and sidewalks and they often re-seed themselves naturally almost everywhere. The strength of their roots lets them squeeze in virtually anywhere, and even lifts up the pavement off the street.

They are perfect flowers for prairie gardens, and are a good match to plants like althea or tree mallows which are both cousins of the hollyhock plant.

Hollyhocks have always been acknowledged to have soothing health benefits. Hollyhock flowers are perfectly edible and are often eaten raw, in salads, or steeped in hot water to make infusions.

It is recommended to stake them to keep them from bending over.
Along a wall, it is enough to attach them with a wire or string stretched from one end of the wall to the other.