It is all in one: beautiful and original, mysterious and ornamental… Black hollyhock is without doubt one of the most remarkable hollyhocks.

It has the scientific name Alcea rosea nigra and bears black-colored flowers, even though the true color is closer to violet-brown than true black.

Black hollyhock isn’t the tallest, but its blooming is beautiful and abundant.

It is a plant that reseeds itself on its own, but sometimes its offspring have slightly different colors from the original brown black, nothing to worry about.

Black hollyhock is amazing when planted with a white wall as backdrop, its color marks a strong contrast that makes it stand out.

Planting and caring for black hollyhock 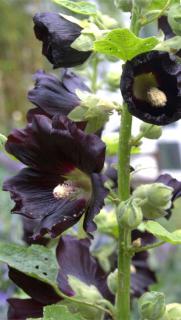 There are sub-varieties that have simple flowers and others that have double flowers, and both types do best in sandy soil.

Caring for and growing black hollyhock is identical to that of all the Alcea rosea.

When your black hollyhock have finished blooming, collect only those seeds coming from the darkest plants and flowers. That way you’ll be deepening the hue with every following generation!