Gloxinia embellishes our homes thanks to its magnificent blooming.

Foliage – evergreen
Blooming – May to October

Planting, care, watering and repotting are parameters that influence and will lead to successfully growing your gloxinia.

It is recommended to plant the tubers in spring in a blend of garden soil and heath soil.

Repot in spring, generally April does the trick.

Favor a bright spot but without direct sunlight, especially during the hottest hours.

You can put saintpaulia in the immediate vicinity of this plant because they both share the same growing conditions.

Pruning and caring for gloxinia

Gloxinia needs fertilizer during the entire vegetation phase, from March to September.
This will ensure you have a beautiful blooming during this entire period.

Early September, slowly stop adding the fertilizer and stop it completely in October.

Once the flowers have died off, you must reduce the watering until the leaves as well have also withered and died.
Once there are no more leaves left, transfer your gloxinia to a cool, shaded and rather dry spot.

At the end of winter, repot the tuber in new soil mix and begin watering regularly again.

As soon as the first buds appear, water abundantly and there you go, your gloxinia is ready for a new cycle of blooming. 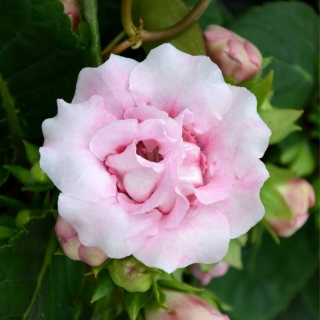 This very beautiful perennial, native to Brazil, will grant you an abundant flowering during a large portion of the year.

Caring for it is relatively easy if the guidelines mentioned above are properly followed.

In the early 19th century, in 1815, this flower was introduced in England under the horticultural name Gloxinia. However, research showed that this “Florist’s Gloxinia” is only distantly related to the actual Gloxinia family (or genus).

That’s why the real name of the flower was later corrected to Sinningia speciosa.

Rather vulnerable to aphids, one solution is to plant 1 or 2 cloves of garlic at the foot of your plant to repel them.