Choisya ternata White Dazzler does exactly what it sounds like – bedazzling fragrant white blooms bursting forth in Spring!

Growing this star-studded shrub will be even easier with a few growing and care tips.

How to plant Choisya ‘White Dazzler’

Either Spring or Fall are perfect for planting your Choisya ternata White Dazzler in the ground. Winter freezing and summer heat would make survival less guaranteed.

Since a pot can be brought indoor in case of extreme heat or cold, you can plant your Choisya ternata White Dazzler to a container anytime of the year.

Water abundantly and regularly for the entire first year, but ensure the roots of the shrub don’t wallow in water. Drainage must be sufficient.

A Choisya ‘White dazzler’ will naturally grow into a harmonious, dense, mounding shape. It isn’t mandatory to prune it.

However, it is a great idea to use Choisya white dazzler as part of a hedge. If this is the case, pruning is of course required.

White dazzler Choisya ternata can be paired with other flower shrubs to create a flowered hedge that will enchant the entire neighborhood.

Cuttings are the optimal way to propagate Choisya White Dazzler.

Note: Choisya ternata White Dazzler is a plant that was bred and patented. Accordingly, it’s illegal to sell any self-propagated White Dazzler choisya without checking with the patent owner first.

Technically, once the first year is over and your Choisay white dazzler has settled in, you don’t need to care for it anymore.

However, it’s always possible to coax a nice and fuller bloom from it if you pay attention to its needs.

It’s rare to see a Choisya ternata succumb to disease, but the following pests may attack it: 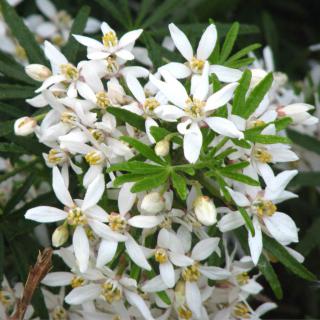 Also called Choisya ternata ‘Londaz’, the White Dazzler Choisya ternata is all about the bang. Fragrance, of course, but both flowers and leaves are slender and spread out from the stem like fireworks.

Leaves are very similar to those of lupine, e.g. they’re long and thin as children’s fingers and fan out in all directions.

Flowers have a scent that is similar to that of orange tree flowers.

Choisya ternata is perfect for growing in a shrub bed and in containers or pots, too.

In the Choisya family, other famous members include the following Choisya varieties :

The common name of Choisya ternata, Mexican orange, comes from “Mexico”, owing to the North American country where the plant was first found and described by botanists. Sad to say it doesn’t produce any oranges!

Read more on shrubs for the garden:

Choisya ternata, superb blooming
Choisya ternata is a marvelous flower shrub at the beginning of spring with its magnificent small, white and fragrant flowers.…