Choisya ternata is a marvelous flower shrub at the beginning of spring with its magnificent small, white and fragrant flowers.

Here are our tips to spur nice growth and spectacular blooming.

It is preferable to plant Choisya ternata in spring or in fall rather than in winter when freezing might risk damaging your shrub.

If purchased in a pot or in a container, planting is also possible anytime during the year while avoiding frost spells and high temperatures.

Right from the start, especially if you’ve planted in spring or summer, water abundantly and regularly, albeit without flooding the roots of the shrub.

Choisya ternata, whether standalone, part of a hedge or in a flower bed doesn’t require any particular pruning.

But it is often nice to succeed in giving it a nice shape, especially when it is part of a hedge.

Cuttings are the best way to propagate your Choisya ternata. This will ensure its traits are preserved (blooming, leaf size, growth habit).

Choisya ternata varieties such as ‘Aztec Pearl’ or ‘Sundance’ and others make for very easy growing and it has the advantage of never growing taller than 6 to 10 feet (2 to 3 meters) tall, which means regular pruning isn’t necessary.

Here are commonly available Choisya ternata varieties (click on the image to be brought to the page): 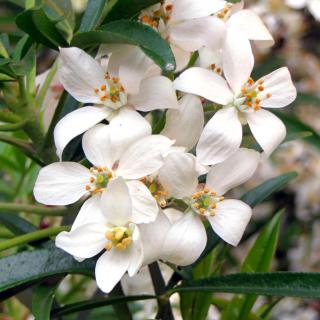 A very beautiful shrub with a fragrance that is close to that of orange trees, a dense shape and magnificent blooming, Choisya ternata, also called Mexican orange tree or Mexican orange blossom is native to that North American country.

Even if you let the shrub grow without ever pruning it, it will never grow higher than 10 feet (3 meters) high.

The flowers, similar to those of the orange tree, are very fragrant. This shrub adapts very well to growing directly in the soil, and also to growing in pots on a terrace or balcony.

Apart from the planting and the following weeks, there is no need to water excessively because the Choisya ternata tree doesn’t need it.

Choisya ternata White Dazzler does exactly what it sounds like - bedazzling fragrant white blooms bursting forth in Spring! Choisya…

'Aztec Pearl' Choisya ternata is a Mexican orange tree variety that is very interesting for its spring green foliage, but…