Chamomile is well-known for its herbal and medicinal properties. Whether the variety is Roman, German or wild, they all belong to the large Asteraceae family.

There are a great many chamomile varieties. The blooming season differs slightly for each, even though they bloom from June to October.

All the chamomile varieties are inclined to full sun emplacements. Oftentimes, however, light shade is enough, especially if the weather is hot and dry.

Chamomile spontaneously self-seeds. You’ll learn that when planted in the ground, it tends to naturally spread out wherever space is available.

Pruning and caring for chamomile

Chamomile requires virtually not the least bit of care because it is an easy-going plant that has the advantage of growing without being followed-up at all.

Cutting off wilted flowers as soon as they wilt. The rationale behind this is that it will spur the plant into growing new flower heads, but this practice isn’t absolutely necessary.

At the end of the season, cut the stems as short as you can and it will burst back in the following spring.

Potted chamomile, like all plants that grow and bloom in garden boxes or pots, requires regular watering.

Chamomile flowers are harvested when they are still freshly opened while already having matured to the point where is different parts are clearly visible and distinct.

To prepare a good mug of chamomile herbal tea, simply steep about a full table spoon of flowers in boiling water for 10 minutes.

Health benefits and properties of chamomile 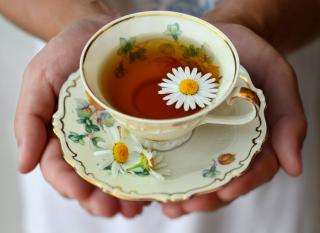 This perennial isn’t only a cute flower, it also has activity that has long been qualified as medicinal.

Thanks to its relaxing effects and its benefits for digestion, chamomile is probably one of the most used flowers.

Its impact on sleeping disorders make it a very common plant in evening herbal tea.

And it also helps treat certain anxiety disorders when used over several weeks.

Chamomile even has properties beneficial for plants. It helps fortify and protect them from insects, aphids and cabbage butterfly especially.

Its flowers also impart delicious flavors, and the growth of the plant will lead to even more flowers if exposed to the sun.

You can thus use its flowers in mixed salads, infusions or to flavor gravy.

Dried flowers of this plant will keep for many long months, and are perfect for your winter evening herbal tea!

Chrysanthemum, a plant that is simply beautiful
Chrysanthemum is a magnificent flower to embellish gardens and terraces. Core Chrysanthemum facts Name – Chrysanthemum Family – Asteraceae Type –…
Chervil, a delicious herb
Chervil is a very tasty herb that loves cool and shaded locations. A summary of key chervil facts Name –…
Oxeye daisy, flowers galore
Daisy is the name given to a host of varieties and so they come in different shapes and colors. Key…