Known for its health benefits and therapeutic value, roman chamomile is an excellent sedative and anti-inflammatory agent.

Its scientific names are “Chamaemelum nobilis” and “Anthemis nobilis“.

Roman chamomile is a herbaceous plant that belongs to the aster family and can easily reach 12 inches (30 cm) tall.

The plant is a stem with long finely cut leaves, with a single flower atop the stem. The flower is actually a floral head which is white and yellow, and is a collection of ligules on a capitulum. This capitulum is where roman chamomile oil is extracted from, but the rest of the plant also has many therapeutic properties.

Long used in Greece since Greek and Roman times to lower fever, shorten insomnia, cure back pain, sore muscles and soother digestive disorders, roman chamomile has proven its worth in medicine, cosmetics and the culinary arts, too. Phytotherapists have thus discovered sedative, anti-inflammatory and relaxing properties. What then are the health benefits of roman chamomile? What is its impact on the body? What dosages are required to ensure effective care? What precautions must be taken to avoid negative side effects? Let’s have a look around…

These compounds not only confer anti-inflammatory and antioxidant properties, but they also provide anti-spasmodic, anti-neuralgic and analgesic effects as well.

Thus, when ingested in the form of infusions, it soothes menstrual pain, hepatic and gastric disorders and also spasmodic pain in the stomach.

Benign conjunctivitis or ocular fatigue can also be resolved thanks to a preparation of roman chamomile used as an eye lotion.

Be careful, roman chamomile must not be mistaken for wild chamomile. 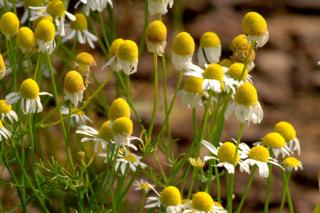 For internal use, chamomile is drunk in an infusion. To prepare it, you must boil 1 cup of water and toss about ten flower heads in. Steep the preparation for 10 minutes and drink before meals. This preparation is effective against digestive disorders, painful menstruation and to recover psycho-emotional balance.

To soothe muscle pain, sore muscles, sprains, etc., a preparation for massage is ideal. For that, prepare massage oil with 3 ⅓ fl. oz. (100 ml) oil base and ⅓ oz (10 g) chamomile flowers. Cover the bowl and macerate for about 5 hours. Apply on painful areas.

To sooth the nervous system, chamomile essential oil can be diffused as a scent in the bedroom (more or less 5 minutes before going to bed) or in the bathtub to a rate of a few drops added to plant-based oil.

Good to know about roman chamomile

There are many varieties of chamomile, each with specific therapeutic attributes. It is thus recommended to check which variety of chamomile must be used for the specific ailment to be treated.

Roman chamomile in its various forms (stem, leaves, essential oil) must not be used by pregnant women, young children, asthmatic persons and persons allergic to pollen.